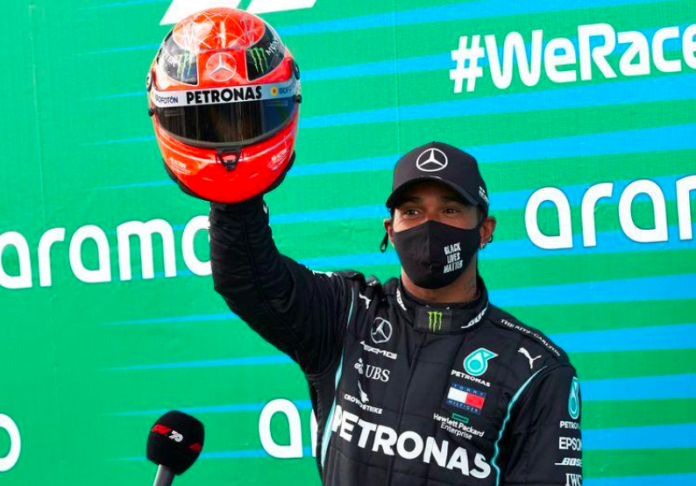 Lewis Hamilton on Sunday surpassed Formula 1 legend Michael Schumacher for most race wins in the sport by taking the top spot at the Portuguese Grand Prix and taking his 92nd victory. Hamilton, who started at the 97th pole of his career, fought back after losing his lead in the early part of the race at the Algarve International Circuit before putting his Mercedes well clear on front to take his record win.

Hamilton struggled for grip in the early part of the race which led to his team mate Bottas taking the lead with sports of rain on the track. After leading the opening lap, Bottas was passed by the charging McLaren of Carlos Sainz. Bottas took back the lead in lap 6 and Hamilton also passed Sainz a lap later as the rain stopped.

Hamilton eventually caught up with Bottas and passed in the 20th lap after which he put daylight between himself and the chasing pack. He was 10 seconds ahead of Bottas while pitting for hard tires with 25 laps to go and eventually eased his way past the chequered flag.

Red Bull’s Max Verstappen also had a dramatic first lap, connecting with Racing Point’s Sergio Perez and sending the Mexican spinning. Both drivers had a strong recovery though, Verstappen eventually climbing back into a comfortable third, while Perez made it up to P7 — the Mexican passed in the latter stages by AlphaTauri’s Pierre Gasly and Sainz.