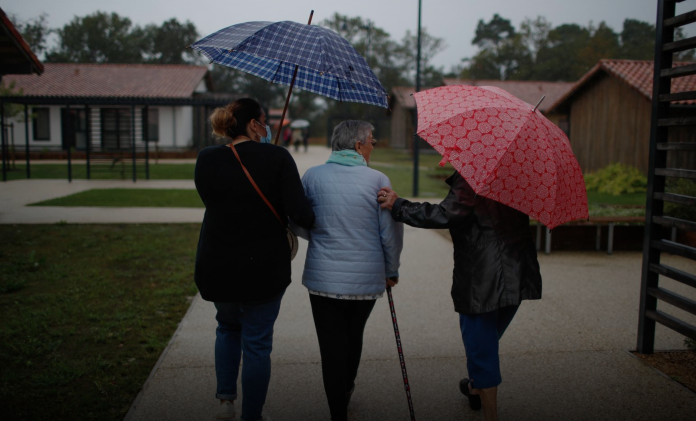 Residents of the purpose-built village near Dax in southwestern France shop for groceries, get pampered at the hair salon and enjoy music recitals just like anyone else.

But this is no ordinary gated community – each of its 105 permanent residents has Alzheimer’s disease.

The village offers the care of a nursing home in an environment dressed up as the outside world to soften any sense of painful rupture with the past, preserving a measure of autonomy and daily routine that may help slow the advance of dementia.

Madeleine Elissalde, 82, was among the first to move in when the village, the first in France and modelled on one in the Netherlands, opened in June. She says she likes the surrounding countryside and the shared house she lives in.

“It’s like being at home,” Elissalde said. “We’re well looked after.”

For a while after she was diagnosed, Elissalde lived with her daughter before moving in with another of her children. The moving around seemed to compound her memory loss, her family said.

But now that her daily reference points are more constant, her family say the memory loss has stabilised and she is able to live a more independent life than she would in a nursing home.

“Her memory loss is less severe,” Elissalde’s grand-daughter Aurore said as the two took shelter from the rain. “She’s happy, she’s rediscovered her enjoyment of life.”

Each resident pays nearly 24,000 euros a year in fees. More than half the 6.7 million euro running costs are subsidised by public authorities.

Researchers from France’s National Institute of Health and Medical Research are paying close attention. They want to know whether the village model can alter the clinical trajectory of the disease and whether it offers value for money.

The village has a cafeteria, a library and music room. Its shop provides fresh fruit and vegetables, and flour and chocolate for baking cakes. There are no nurses in white coats.

“We don’t have a till,” said Christine Surelle, who volunteers in the shop. “Our currency of exchange is smiles.”

Her store is as much a place for human contact as it is a place to obtain essential necessities, she said.

“It’s to maintain their sociability, to maintain a contact with the old world they once knew, to ensure there is no brutal break with the past.”