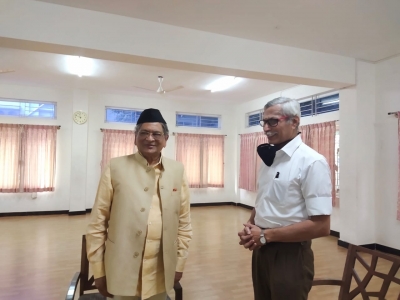 Former external affairs minister, S. M. Krishna on Monday asserted that the country needs the Rashtriya Swayamsevak Sangh (RSS) today more than ever not only to inculcate patriotism but also express it.

Delivering a customary presidential address as part of Vijayadashmi celebrations at the Rashtriya Swayam Sevak Sangh’s residential branch in Sheshadripura Nagar here, Krishna said that one should imbibe patriotism and also express it.

The veteran socialist leader joined the Congress in early 60s, staying on till 2017 and made a “U” turn to join the BJP.

Even to this day, Krishna’s tenure as Congress party CM between 1999-2004 is termed as golden era for Bengaluru as the city was transformed from Garden City to Silicon Valley of Asia with several Fortune 500 companies setting up their offices here.

He also served as Maharashtra governor and had a stint as external affairs minister during UPA-2.

Contending that RSS is not a political institution, Krishna added that RSS was built in 1925 with a foresight to build a strong country.

“It was Dr Hedgewar’s vision to build an organisation to prepare the country for the challenges post independence. Besides, strongly believing in Indian culture and values are aligned to the concept of ‘Vasudaiva Kutumbakam’ (The world is one family),” he maintained.

He also added that he arrived to this programme out of reverence for the RSS’ work.

“I have served the political field for a long time. I grew up in the Ramakrishna Ashram and was inspired by Paramahamsa and Vivekananda. I believe the country needs RSS today more than ever,” he reiterated.

The former external affairs minister said he took note of RSS quite late in his life. “There are lakhs of RSS workers who have dedicated themselves to the service of the nation. This is patriotism. If the young are sensitised early in life, it will help them comprehend this country better,” he added.

Recalling an incident during his tenure as a parliamentarian, Krishna said that while interacting with some RSS workers, he learnt that the then RSS chief used to travel by train.

“This simplicity we must inculcate. As Kennedy said, ask not what your country gave you, instead ask what you gave the country, the people of India need to find the answer to the question. We all spend a lot of time on self development and for our family. Everyone including Hindus, Muslims, Christians, Buddhists and Jains must ask themselves how much time each is devoting for the country,” he said.

Emphasising that democracy in India was robust, Krishna said that the institutions like the Election Commission are committed to safeguarding democracy.

“When Atal Bihari Vajpayee lost majority, he readily gave up power with a smiling face. This balanced state of mind even while relinquishing is intrinsic to Hinduism and such equanimity isn’t part of other cultures,” Krishna pointed out.

The former external affairs minister also stressed on the need for education reforms. “Our present education is imparted as per the English system. We need a total overhaul of the entire education system. Unfortunately, education being a state subject, the Centre is not able to intervene and bring in big reforms. We need big reforms in present education too,” he argued.