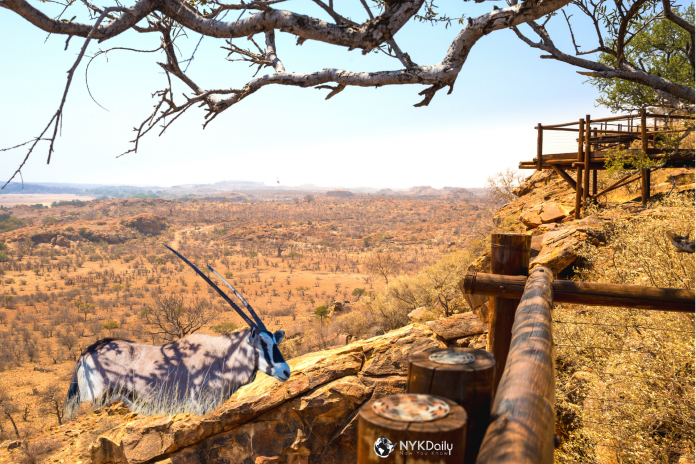 Mapungubwe Kingdom (1075CE–1220CE) was an ancient state in South Africa situated at the Limpopo and Shashe rivers’ junction, south of Great Zimbabwe. The name is derived from either Tshivenda or TjiKalanga. The name might mean “Hill of Jackals.” The state was the first stage in a development that would culminate in creating the Kingdom of Zimbabwe in the 13th century, and with gold trading links to Kilwa Kisiwani and Rhapta on the African east coast. The Mapungubwe Kingdom lasted about eight decades, and at its height, the capital’s population was about 5000 people.

The most populous settlement from what has been called the Leopard’s Kopje culture is known as the K2 culture and was the direct predecessor to Mapungubwe’s settlement. The people of the K2 culture, apparently derived from the Shona people of Southern Africa, were drawn to the Limpopo-Shashi area, likely because it presented mixed agricultural possibilities. The region was also a prime elephant country, granting access to precious ivory. The control on ivory and gold trade significantly enhanced the political power of the K2 culture. By the late 1000s, the K2 population had outgrown the region and moved to Mapungubwe Hill.

Spatial organization in Mapungubwe’s kingdom included the use of stone walls to define critical areas for the first time. There was a stone-walled home likely occupied by the chief councilor. Wood and stone were used together. There would have also been a plank wall surrounding Mapungubwe Hill. Most of the town’s population would have lived inside the strong western wall.

Mapungubwe society is considered by paleontologists to be the first class-based social system in southern Africa; its leaders were distributed among the citizens and higher in rank than them. Mapungubwe’s spatial arrangements and architecture also provide the oldest evidence for religious leadership in Africa’s southern region.

Life in Mapungubwe was concentrated on farming and family. Particular sites were designed for household activities, initiation ceremonies and other cultural functions. Cattle lived in kraals situated close to the residents’ houses, reflecting their value.

Most speculation about community continues to be based on buildings’ remains since the Mapungubweans left no recorded document.

The kingdom was probably divided into a three-tiered hierarchy with community leaders occupying small hilltops, commoners occupying low-lying sites and Mapungubwe hill’s capital as the highest authority. Bosses and leaders within the state were buried in hills. Royal wives lived in their area away from the working king. Important men maintained unique homes on the capital’s outskirts. This kind of spatial division occurred first at Mapungubwe but would be replicated later in Rozwi and Butua states. The population growth at Mapungubwe may have led to full-time experts in ceramics, specifically pottery. Gold objects were unsealed in elite burials on the Mapungubwe Hill (royal hill).

Around two dozen skeletons were excavated on Mapungubwe hills in the last few years, dating from the Mapungubwe Kingdom.

Most of the skeletal remains were buried with rare accessories, with most adults buried with classy glass beads. Two adult burials (labeled numbers 14 and 10 by the early scientists) and one unknown skeleton (referred to as the original gold burial) were associated with gold artefacts and were discovered from the grave area upon Mapungubwe Hill. Recent genetic studies found these first two skeletons to be of San/Khoi descent and perceived them to be a queen and king of Mapungubwe. Despite this latest information, the remains were buried in the traditional Bantu burial position (sitting with arms folded around the front of the knees and legs drawn to the chest) and facing west. The skeleton numbered 10, a male was buried with his hand holding a golden scepter.

The skeleton labeled number 14 (lady) was buried with at least 100 gold wire bangles around her right ankles, and there were at least one thousand gold beads in her tomb. The last gold burial (male), probably the king, was buried with three objects made of gold foil and headrest tacked onto a wooden core, depicting a wand, bowl, and rhino.