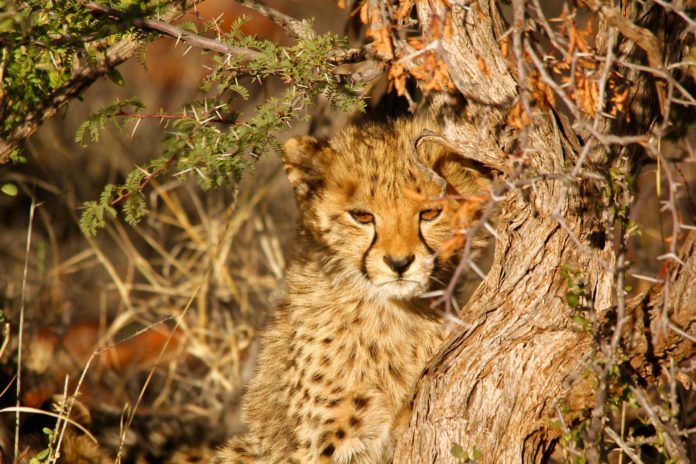 A feature that is instantly noticed on the big cats is the tremendous variation in their markings or colors. From bold stripes to curious spots, tigers and leopards have gripped the interest of scientists. It is believed that the detailed patterning of stripes or spots seen on big felines has most likely resulted in an evolutionary function of deception.

Detailed analysis and studies of these patterns of spots and stripes’ evolutionary trend reflect the fact that they can appear and disappear swiftly. Some of the questions that evolutionary scientists are trying to answer include why leopards possess markings in rosettes but tigers have bold and elongated stripes. The belief is that the leopard must have migrated to an area with lots of trees, bushes and patchy shadows but studies are still in pursuit.

It has also been observed that big cats that dwell in thick habitats, amidst the trees or those that are active under dim light conditions at night are the ones that are most likely to have patterns. This is true, particularly for misshapen and complicated designs. Evidence once again points to the importance of camouflage concerning these patterns.

The Evolution of Stripes in Tigers and Spots in Leopards

To understand how tigers ended up with stripes and how leopards gained spots and not vice versa demands proper comprehension of the genetic mechanics that form the basis of this evolution. Studies have led scientists to identify morphogens as the particular kinds of proteins that trigger cells to produce pigments and lead to spots or striped pigmentation.

In 2012, scientists from King’s College in London were able to make a breakthrough in the research concerning the appearance of patterns in animals. They discovered that the constant and repeating patterns in animals like the tigers and leopards could be attributed to a set of morphogens that functioned in tandem as both activating and inhibiting substances.

Their research work provided the validation for a well-known theory that had gained ground for over 60 years. Morphogens are chemical substances that function in several ways, one of which is by influencing the other’s expression and the eventual pattern of spots or stripes.

Other factors influence the activity of these morphogens. The research firmly established that evolution of stripes and spots in big cats was due to the activator-inhibitor system in the cells. These patterns and markings have evolved over thousands of years as animals adapted adequately to their respective environments.

Even though scientists have been able to connect patterning with the environment, there have also been some other intriguing discoveries. A good example is that only tigers have vertical and elongated patterns, and these were not even connected with grassland habitat. That aside, tigers are very good with camouflage, and this brings a room for question, as to why the same vertical stripes are not seen in cats and other mammals if they were that important for deception.

As mentioned earlier, the spots and stripes’ primary function is for camouflage, which facilitates the hunting of prey by the big felids. The shadow emanating beneath trees can be seen with light. This explains why a leopard will have gold-colored fur full of black rosette spots. Leopards tend to do their hunting in thick foliage because they can swiftly dash for the trees if there is any impending danger or risk.

As for tigers, they do their hunting mainly on plains that have long and tall grasses. In this scenario, there will be no spotted shadows. However, there will be grasses that produce elongated shadows. Grass also tends to move with the lightest winds. Elongated stripes serve the tiger very well in this kind of environment where the shadows are always changing.