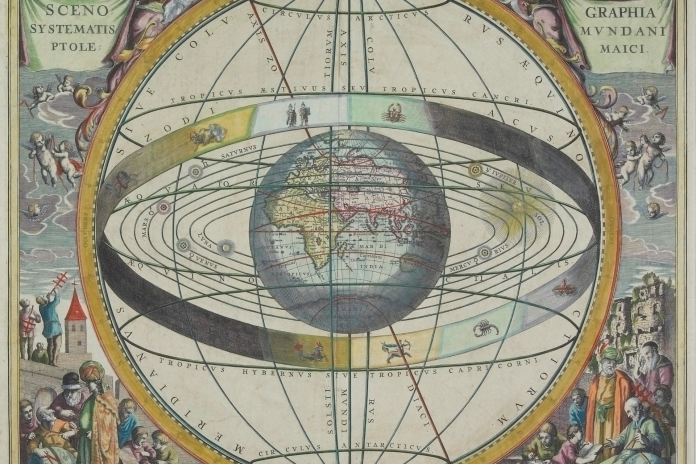 The zodiac is a region of the sky within about 8° either side of the ecliptic, including all possible positions of the moon, sun, and most well-known planets. The English word zodiac stems from zōdiacus, the Latinized form of the Ancient Greek zōidiakòs kýklos, indicating “cycle or circle of animals”. Zōidion (ζῴδιον) is the diminutive of zōion (ζῷον, “animal”). The name indicates the influence of animals (and mythological hybrids) among the twelve signs.

The ecliptic division into the zodiacal signs begins in Babylonian astronomy around 1300 BCE. The zodiac pictures on stars in older Babylonian star catalogs, such as the MUL.APIN record, which was compiled approximately 1100 BCE. Some constellations can be sketched even further back, to Bronze Age (First Babylonian dynasty) sources, including Cancer “The Crab,” from AL.LUL “The Crayfish,” Gemini “The Twins,” from MAŠ.TAB.BA.GAL.GAL “The Great Twins,” among others recorded.

Around the dawn of 500BCE, Babylonian astronomers split the ecliptic into 12 equal “signs,” by similarity to 12 schematic months of 30 days each. Each sign included 30° of celestial longitude, thus forming the first known cosmic coordinate system. According to modern astrophysics calculations, the zodiac was invented/introduced to the public between 409-398 BCE and probably within very few years of 407 BCE.

In Babylonian astronomical records, a planet position was usually provided concerning a zodiacal sign alone, less often in particular degrees within a sign. For ephemerides, a planet’s daily positions were not as significant as the astrologically important dates when the planet crossed from one zodiacal sign to another.

Jyotish, now the term for popular Hindu astrology, historically was the branch of knowledge devoted to observing astronomical bodies to estimate the right time for the Vedic practices. It is one of the six Vedangas or ancillary science connected with the Vedas that developed. This field of study was involved in fixing the days and hours of Vedic rituals. It predates Babylonian astronomical knowledge by over 1000-years. However, the Jyotisha wasn’t extensively used in astrological predictions and so, Babylons come first in the zodiac. The Hindu zodiac employs the sidereal coordinate system, which refers to the fixed stars. The Tropical Zodiac is divided by the ecliptic and equator’s intersections, which shifts about the backdrop of immovable stars at a rate of 1° every 72 years, creating the miracle known as the precession of the equinoxes.

The Hindu zodiac signs and similar Greek signs sound very different, being in Sanskrit and Greek, respectively, but their symbols are almost identical. For instance, Kumbha means “water-pitcher” and represents Aquarius, the “water-carrier,” and dhanu means “bow” and means Sagittarius, the “archer.”

The Zodiac knowledge is also mentioned in the Hebrew Bible; E. W. Bullinger rendered the animals appearing in the book of Ezekiel as the central signs of the 4 quarters of the zodiac, with the Bull is Taurus, the Lion as Leo, the Man depicting Aquarius and the Eagle describing Scorpio. Some authors have connected the twelve tribes of Israel with the same signs, and/or the lunar Hebrew calendar having 12 months in a lunar year.

The Babylonian star records came in contact with the Greek astronomy in 334 BCE, via Eudoxus of Cnidus. Chaldea or Babylonia in the Hellenistic world came to be so recognized with astrology that “Chaldean wisdom” became among Romans and Greeks the synonym of divination through the stars and planets. Hellenistic astrology is derived in part from Egyptian and Babylonian astrology. Horoscopic astrology first developed in Ptolemaic Egypt (305 BCE–30 BCE). The Dendera zodiac, a relief dating to 50 BCE, is the first known depiction of twelve signs’ classical zodiac.

The oldest surviving Greek text using the Babylonian division of the zodiac into 12 signs of 30 equal degrees is the Anaphoricus of Hypsicles of Alexandria (fl. 190 BCE). Especially important in the evolution of Western horoscopic astrology was the astronomer and astrologer Ptolemy, whose work Tetrabiblos laid the Western astrological tradition’s foundation. Under Ptolemy, the houses, signs, and planets of the zodiac were rationalized and their use set down in a way that has evolved little to the present day.

Ptolemy lived in 200CE, three centuries after discovering the equinoxes’ precession by Hipparchus around 130 BCE. Hipparchus’s lost work on precession never wandered very widely until it was brought to fame by Ptolemy. There are few reports of precession outside the work of Ptolemy until late Antiquity. By this time, Ptolemy’s influence was extensively established. Ptolemy recorded the theoretical basis of the western zodiac as a tropical coordinate system. The zodiac is aligned to the solstices and equinoxes, rather than the visible constellations that carry the same names as the zodiac signs.