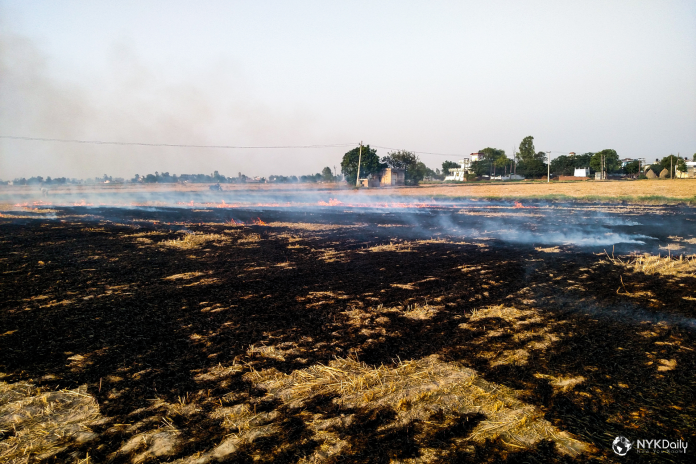 The System of Air Quality Weather Forecasting and Research (SAFAR), under the Ministry of Science and Technology, on Thursday flagged an increase in stubble burning fires around Punjab, Haryana, and as well as areas surrounding Delhi, which, every year, severely affects the air quality in the national capital.

According to the National Academy of Agricultural Sciences, burning of one tonne of rice crop residue releases about 13 kg of particulate matter, 60 kg of carbon monoxide and 1,460 kg of carbon dioxide and other harmful gases.

As per the forecasting system, the air quality of the national capital is deteriorating day-by day, with the particulate matter with diameters of 2.5 and 10 microns, which are too small to be filtered out of the body, increasing to 157 and 55 micrograms per cubic metre, respectively. Coarse dust particles are the lead pollutant.

The air quality index of the national capital is likely to deteriorate and reach the lower end of the poor category on October 3 and 4. It will cross the 200-mark on October 3.

“An increase in stubble burning fires was observed yesterday (Wednesday) around Punjab, Haryana, and neighbouring border regions,” the SAFAR reported.

Burning of stubble in these two agricultural states marks the beginning of a highly-polluted period which goes on to last for about three months. The farmers harvest rice in October, which leaves them about three weeks before the next round of wheat sowing is to begin.

With cheap labour no longer available, and machinery to extract the crop residue or stubble expensive or unavailable, the farmers resort to the easiest possible option which is to burn the stubble to prepare the fields.

US space agency National Aeronautics and Space Administration’s (NASA) Fire Information for Resource Management System has also shown that the farmers have started burning the crop residue in parts of Punjab and Haryana.

“Stubble burning has started in Punjab and Haryana like every year. Due to this, people will face breathing issues. At this time, both the Central and state government should find a solution,” said Vikrant Tongad, environment conservationist and founder of Social Action for Forest and Environment (SAFE).

“Rather than burning the stubble, it should be used for other purposes. Farmers should not be punished, but should be provided with technology, knowledge and incentives so that they do not burn it.”