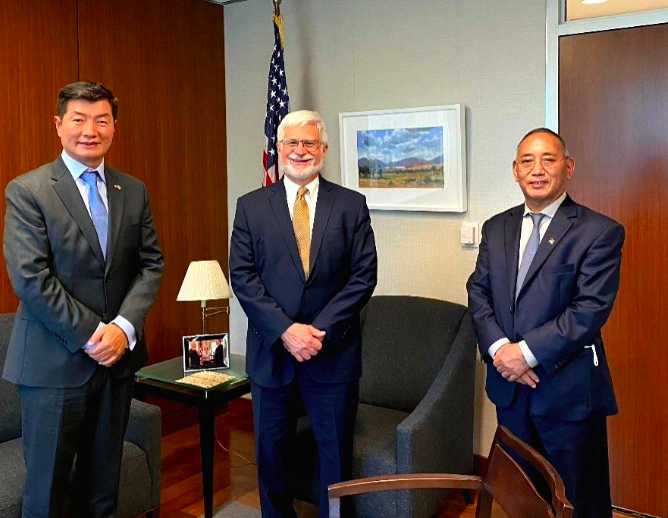 This month’s meeting between the democratically elected Central Tibetan Administration (CTA) and the US State Department was historic and recognition to the government-in-exile that is headquartered in this northern Indian hill station.

Its next top most priority is to make an official policy of the US to see the selection of Tibetan Buddhist leaders, including the future Dalai Lama, without any Chinese influence.

These are the views of CTA President Lobsang Sangay, globally known as Prime Minister-in-exile, who just returned from his hectic visit to the US after meeting newly-appointed Special Coordinator for Tibetan Issue, Robert Destro, and other high-ranking functionaries in the White House.

Sangay, who is undergoing quarantine at his house here after his arrival from the US last week, told IANS in an exclusive interview on Thursday that the next priority of his government is passing of Tibet Policy and Support Act in the Senate.

“This Act builds on the Tibet Policy and Support Act of 2002 and will be a major update to the US policy on Tibet.

“Among important updates, passing of this Act will make it the official policy of the US to see that the selection of Tibetan Buddhist leaders, including the future Dalai Lama, follows the wishes of the Tibetan Buddhist community and according to the instructions of current Dalai Lama without any influence from the Chinese government,” Sangay categorically told IANS.

Without mincing words, he added, “The Act will also forbid China from opening a new consulate until a US consulate is allowed in Lhasa.”

According to Sangay, the meeting was a great achievement and historic moment for the CTA as well the Tibetan movement.

“This particular meeting was significant because it sent a strong message of support and reaffirmed the US commitment to the Tibetan cause while formally acknowledging the Central Tibetan Administration and its leadership, which is unprecedented,” he said.

“So, to allow the head of the CTA is to recognise the Tibetan government-in-exile,” he explained.

“And it has been the consistent view that allowing the CTA head for such a visit would create inconvenience with the Chinese government. For the past nine years, the CTA through the Office Tibet in New York, which was later shifted to Washington DC, has been engaged in working out such a formal meeting between the Sikyong (CTA President) and the US Statement Department.

“We are grateful that the hard work paid off and that the US State Department realized the strategic significance of officially receiving the Sikyong and acknowledging the CTA.

“Evermore so today, the world has learnt the hard way the threat China poses not just to the human rights of the Tibet people and other minorities but also to the human rights worldwide. For the past 60 years, we have been saying the same. When it comes to Tibet cause and the Tibetan people, the CTA is the official representative of the Tibetans in and out of Tibet, and it was crucial that such talks and meetings on Tibet issue and human rights issue was held formally and not behind closed doors,” he said.

On his meetings with other top-ranking US officials, the 51-year-old Harvard educated democratically elected CTA head said: “At the meetings I briefed about critical situation in Tibet and the recent report of forced labour camps in Tibet.

On a possible meeting between the US President and the Dalai Lama, he replied: “Yes, we are hopeful.”

“His Holiness has met with several past US Presidents and has done so not just as the Tibetan spiritual leader, but also as a Nobel laureate and global ambassador of peace and compassion loved and respected around the globe,” he said.

Expressing gratitude to Secretary of State Mike Pompeo for renewing calls on China to resume talks with the Dalai Lama’s envoys to resolve the vexed and protracted issue of Tibet, without preconditions, he said: “We are really grateful to Mike Pompeo for his initiatives.

“He has been among the strongest critics of China’s human rights violations. The US government supports the ‘middle-way approach’ which seeks to resolve the issue of Tibet non-violently through dialogue. This approach envisioned by His Holiness and democratically supported by the Tibetan people saw great acknowledgement all over the world. And I strongly feel that China should heed these calls.”

Sangay, who is toeing the path adopted by the Dalai Lama for years to resolve the issue of Tibet, is expecting some changes in the mindset of the Chinese over granting greater autonomy for people in Tibet.

“Well we hope so. China for the past six decades has failed to achieve ‘stability’ and ‘unity’ that it so sought for through its repressive policies. It has not achieved it in the past 60 years and it’s not going to achieve it in the future unless the Tibet issue is resolve peacefully. We are seeking genuine autonomy which is already stipulated in China’s own constitution. It’s a win-win proposition,” Sangay, who is at the helm for his second consecutive term, added.

The Dalai Lama has lived in India since fleeing his homeland in 1959. The Tibetan exile administration is based in this hill town.