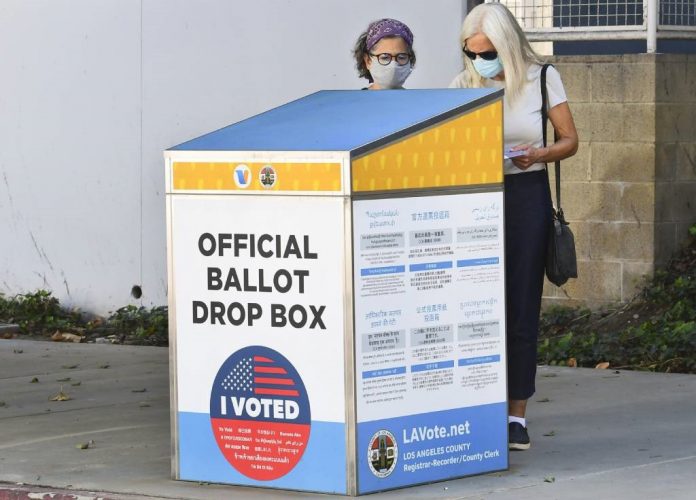 California officials said on Monday they were sending cease-and-desist orders to state Republican leaders demanding removal of “unofficial, unauthorized” ballot collection boxes placed by the party in at least three counties in violation of election law.

But the California Republican Party, while acknowledging it had erected its own ballot drop-off boxes “statewide,” vowed to defy orders to remove them, setting the stage for a potential legal showdown with state election officials.

The dispute made California, a solidly Democratic stronghold in the Nov. 3 presidential election, an unlikely new flashpoint in the partisan fight over absentee and mail-in voting that Republicans have attacked with unfounded assertions as being rife with fraud.

Collection boxes have assumed greater urgency in the midst of the coronavirus pandemic, especially after the U.S. Postal Service warned that election mail could be delayed this year.

“Unofficial, unauthorized drop boxes are not permitted in the state of California,” said Padilla, whose office oversees election regulations and enforcement in the state. He said state officials had received reports of Republican-controlled collection sites set up in Los Angeles, Fresno and Orange counties, some of them falsely labeled as official.

‘TAMPERING WITH THE VOTE IS ILLEGAL’

Padilla said the cease-and-desist notice being sent to state and county Republican officials gives them until Oct. 15 to remove the collection boxes in question or face legal action.

“Tampering with the vote is illegal, and anyone who knowingly engages in the tampering or misuse of a vote is subject to prosecution,” Becerra said. He added that included anyone found to be promoting a voter fraud scheme.

California Republican Party spokesman Hector Barajas acknowledged the party had established an unspecified number of its own ballot drop-off boxes “statewide” over the past two weeks and intended to keep them in place.

“We’re not going to stop this program,” he told us.

Barajas said doing so was legal under Democratic-supported state laws allowing third-party individuals to collect and deliver ballots for other voters with their consent – a process Republicans have disparaged as “ballot harvesting.”

“Democrats are now upset because organizations, individuals and groups are offering an opportunity for their friends, family and patrons to drop off their ballot with someone they know and trust,” Barajas said in a statement. “California Republicans would be happy to do away with ballot harvesting.”

Padilla and Becerra disputed such arguments as beside the point in their briefing to reporters.

While California voters are permitted to designate someone else to physically submit a ballot on their behalf, a memorandum to county election officials from Padilla’s office cited the state election code defining a lawful drop box as “a secure receptacle established by a county or city and county elections official.”

The memo also says state regulations include extensive requirements for the design and security of the containers, which must be clearly marked as “Official Ballot Drop Box.”

Earlier in the day, a spokeswoman for Orange County District Attorney Todd Spitzer, a Republican, said prosecutors in his office had opened an investigation into reports of unofficial drop boxes in at least two locations there, one of them by a county Republican official.

“It’s our understanding that they’ve already been removed, but we’re trying to determine that,” the spokeswoman, Kimberly Edds, told us.