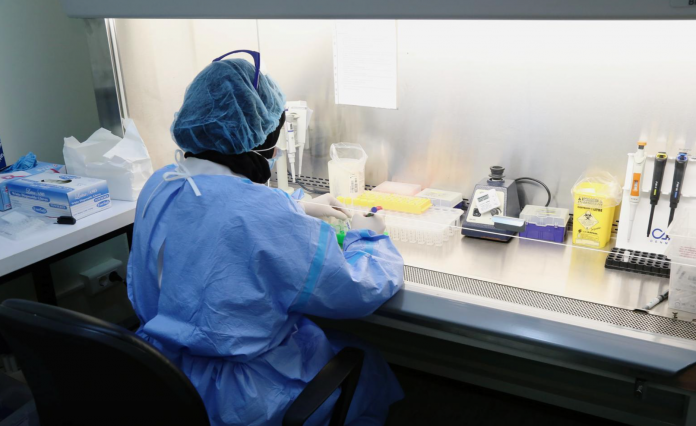 A drastic rise in COVID-19 infections has pushed Lebanon’s hospitals to the edge, and experts warn they will soon be unable to cope as the country buckles under a succession of devastating crises.

Lebanon’s healthcare system was already struggling before several hospitals were badly damaged by a massive explosion at the port of Beirut in early August.

Now medical supplies are dwindling thanks to a shortage of dollars due to an ongoing financial crisis, doctors are emigrating in droves, and fears are growing that subsidies on medicines might soon be lifted.

“At the moment, COVID-19 in Lebanon is not under control,” said Firass Abiad, who runs Beirut’s Rafik Hariri University hospital, the largest coronavirus facility in the country. “We are seeing a high positivity rate relative to testing.”

Lebanon registered a record 1,321 new daily infections over the weekend, bringing its cumulative total to more than 43,000 cases while the death toll stands at 398.

The numbers are low by global standards, but intensive care units have reached a critical 82% of capacity, according to the World Health Organization. Meanwhile, the virus continues to spread in Lebanon’s overcrowded prisons, public hospitals and densely packed cities, where mask-wearing remains lax.

“If we continue with this exponential growth, I don’t think we’ll last more than a couple of weeks,” said Dr Eveline Hitti, chair of the emergency department at the American University in Beirut’s Medical Center.

Lebanon was praised for containing the spread early in the pandemic, averaging fewer than 100 daily cases until August. But as the country’s woes began to multiply, concerns over the coronavirus took a backseat.

Lebanon is facing its worst crisis since its 1975-1990 civil war. Its banking system has been paralysed since last year, its currency has crashed by 80%, and banks have severely restricted withdrawals. The financial meltdown was compounded by the explosion on Aug. 4 that wrecked a swathe of Beirut, killing nearly 200 people and damaging several hospitals.

The government has for years owed hospitals millions of dollars in arrears. Their unpaid bills are mounting. Doctors told us that patients at some hospitals were struggling to pay bills as low as 50,000 Lebanese pounds – $6.25 at Monday’s street rate.

Some hospitals have doubled prices to keep up with hyperinflation, while others have furloughed staff. “It’s not for profiteering reasons,” Hitti said. “It’s a matter of survival.”

The COVID-19 spike began in June, after the airport reopened. But the port explosion made matters worse as thousands of people swarmed the devastated streets and hospitals, abandoning coronavirus precautions.

The government reimposed a partial lockdown at the end of August, but it was only loosely observed by most Lebanese, exhausted by trying to survive in a country already on its knees. Restaurants, bars and shops are open.

“My children are going to go hungry if I close my shop or ask every customer who comes through my doors to wear a mask,” said 47-year-old Mohammad Dagher outside his Beirut tyre shop.

The government imposed local lockdowns on Sunday in 112 municipalities, but whether these will be effective remains to be seen, as faith in the state continues to dwindle.

For the country’s most vulnerable, the malaise could turn into a death sentence.

Malak Samara, 34, has two sons in one of Lebanon’s overcrowded prisons, where infections are beginning to spike.

“I’m afraid I’m going to have to carry them out of the prison dead,” she said. “Have some mercy on us mothers.”