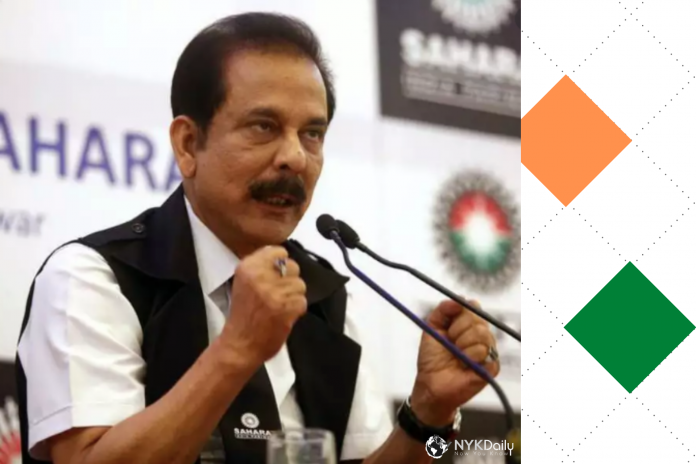 India is home to some of the most eye-catching billionaires on the planet. From Mukesh Ambani to Lakshmi Mittal to Shiv Nadar and Azim Premji, the country is bursting with money bags. There is another set of billionaires who have outclassed others in terms of controversy, and these include Subrata Roy, Vijay Mallya, Nirav Modi among many more.

This piece will dwell into the shocking fall from grace to grace of the humble lad who started his business in Uttar Pradesh – Subrata Roy of the Sahara India Pariwar fame. He is a familiar face to millions of Indians and one that you get to see everywhere. Roy seemed to have his hands in every pie, from telecommunications to real estate to sports to television and even movie production, he was everywhere. He paid attention to his magnanimous image building.

For 32 years, he climbed upwards and dominated the corporate ladder with seeming success. But in a downturn of events that has stunned everyone, everything came crashing down. Over one million employees practically worshipped him and his fortune soared over one billion dollars by the mid-1990s.

A deep look at the life story of Subrata Roy reveals that he made some fundamental mistakes, which eventually led to his downfall and the decline of his expansive Sahara business empire. Here are the mistakes Subrata Roy made as a leader:

Poor Interpretation of Turn of Events

The chaos that Roy found himself did not happen overnight. It was a culmination of a series of events. Roy was not proactive or intelligent enough to piece everything together. Assuming he had good foresight, he could have prevented many of the mishaps that later hit him and his business.

Many people were shocked to realize that Roy resorted to selling his assets and other buildings to offset bills or fines from his legal troubles. It was more than frightening for someone who projected a super-rich billionaire’s image that Roy did not have stable financial backups. A profitable business will always have backup strategies for the rainy day, but Roy did not have any. He probably thought such a day would never come.

Many tycoons have their media outlets to control their narration of events and state their sides of the story. As the media descended on Roy, he did not have a good media platform to launch effective counteracts. Hence, he ended up being pilloried all across television and on the faces of newspapers.

Countless people trusted Subrata Roy and invested all they had with him. They did so with the hope that he would help them grow their assets but he did not do any of that. He instead preferred to live large on their sweat while operating the businesses with no transparency. He had no tangible media platform to counter the backlash from his victims.

In the 1980s, he started his chit scheme by targeting illiterate and poor rural Indian people with his outlandish claim and promises of prosperity. Most Indians knew nothing of sound banking principles and Subrata Roy took advantage of that. He encouraged poor Indians to donate 10 to 20 rupees everyday.

He then sweetened the deal by saying that he was going to double the money in three years. This was a scam and a pyramid scheme but most of those who saved with him saw him as a savior due to ignorance. They believed he was going to protect them from penury and usher them into an age of abundance. They were blissfully unaware of the seemingly corrupt system.

In 2008, it was also revealed that two of his real estate businesses did not have the approval to raise money from over 50 people via bonds. He dragged the issue with the regulatory body SEBI right up to the Supreme Court until he lost in August 2012. Sahara Group was then slammed with a judgment that included depositing Rs 24,000 crore with the SEBI in the space of 90 days.

SEBI was then tasked with ensuring that the money is refunded to the original investors. The failure to entirely comply with the Supreme Court ruling in a punctual manner led to the dramatic arrest of Roy and his two executives. This arrest and his eventual imprisonment at the notorious Tihar Jail ended up sending immense shock waves across India. It was a devastating effect on the brand that Roy had carefully carved over the years which came crashing down in an instant.

Despite his sharp practices, Subrata Roy managed to stay under the radar for so long because he operated as a private entity. He would make what probably remains the biggest mistake in his corporate life when he decided to go public. Buoyed on by his financial success and perhaps a superior complex, he believed that he could pull off the same stunt in the public sphere, only to be proved wrong in the future.

Going public as an entrepreneur means you are subjecting yourself and your business to some of the most intense probes ever. That was precisely what happened to him and he did not survive it. Investigative journalists and regulatory agencies beamed their searchlights on him, and what they discovered shocked everyone.

His major problems commenced in 2008 when the Reserve Bank of India ordered his Sahara Financial Corporation to cease the pooling of fresh deposits. This was a major hit to the venture; it could suffocate cash flow to the other ventures and also not fit into the Pyramid module that he had been banking on. His problems worsened when he got entangled with the market regulating agency SEBI.

Two of his enterprises in the real estate industry were slammed with a ban on issuing bonds to investors. The companies were accused of promising massive returns in ten years under what looked like another pyramid scheme. Over Rs. 20,000 crore had already been raised from almost three crore investors all over the nation before the regulator stepped in.

Although Subrata Roy excelled at showmanship, the same cannot be said of his professional performance. Even though he had his businesses in several sectors, he was not raking in profits. Losses and debts were piling up, and the workers were not being paid.

Workers’ welfare did not seem to be a priority for him as the employees worked under shocking conditions. He demonstrated negligence in this regard, and it should not come as a surprise to anyone that it eventually led to its collapse.