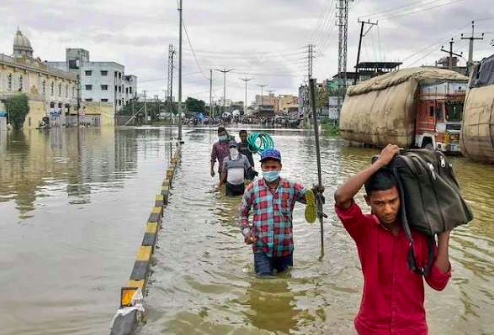 The government of Telangana will provide financial assistance of Rs 10,000 each to 3-4 lakhs families affected by heavy rains and floods in and around Hyderabad.

Minister for municipal administration and urban development K. T. Rama Rao on Tuesday said that the officials and public representatives will hand over financial assistance at the doorstep of the citizens.

He visited various inundated colonies in the limits of Greater Hyderabad Municipal Corporation (GHMC) and handed over the financial assistance of Rs 10,000 to the affected families.

KTR, as the minister is popularly known, interacted with the residents and stated that the government is taking up relief measures on a war footing.

KTR and animal husbandry minister Talasani Srinivas Yadav handed over the financial assistance to the affected families in MS Maqta and Raj Nagar in Khairatabad.

They also visited MJ Colony in Shaikpet and Nadeem Colony in Toli Chowki to distribute the assistance.

Later, KTR also visited Ayyappa Colony in Nagole and Lingojiguda in LB Nagar and handed over the financial assistance to the residents. Speaking at Ayyappa Colony, he said that as a temporary relief the government is handing over Rs 10,000 to the families affected by the rains.

He assured the people that the officials will soon inspect the damaged houses and submit a report to the Government. The government will provide more financial support to the families whose houses were partially/fully damaged houses.

He asked them to stay on the ground for the coming 10 days and assist the needy.

On a call given by the chief minister, GHMC based MLAs and MLCs have decided to donate their two-month salaries to CM Relief Fund. KTR appreciated the elected public representatives for their decision.

The minister stated that the government will support every person who has been affected by the heavy rains. If needed the government is ready to spend more on relief measures.

Minister appealed to all the elected public representatives, residential welfare associations, NGOs to come together and support the government in providing relief measures to the citizens.

Minister assured the citizens that the government will come up with permanent solutions to avoid flood-like situations in the city.