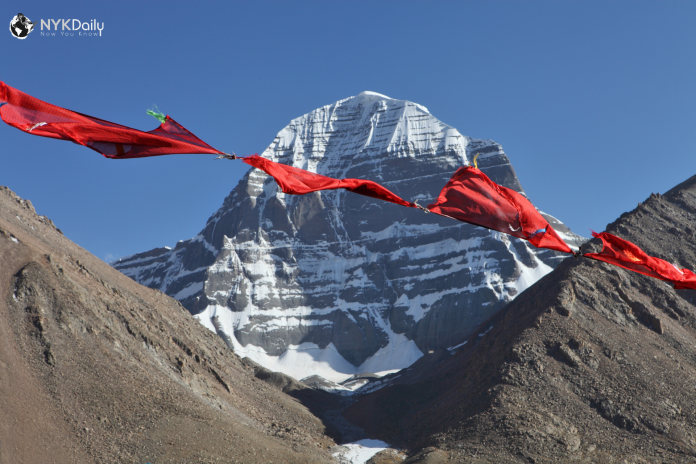 Religion is crucial for humanity and explains the presence of sacred sites, religious centers, etc. Talking of holy places, Mount Kailash is one of them, and it is one that has puzzled humanity for thousands of years.

Unlike other mountains such as Everest, which is the highest in the world, no one can climb Mount Kailash. If you are an avid mountain climber, you stand a better chance scaling Mount Everest than Mount Kailash. Of course, scaling Everest is by no means an ordinary achievement.

Situated in the Kailash Range, this mountain towers to a height of 6,638 meters (which is 21,778 feet), and it is a part of the Trans-Himalaya mountain range in the Tibet Autonomous Region. The mountain itself is not far from Lake Rakshastal and Lake Mansarovar, and it is also not far from some of the longest rivers in Asia. These include Karnali, Indus, Brahmaputra, and Sutlej. Karnali is one of the tributaries of the iconic River Ganges.

Mount Kailash is unlike a mountain that you have ever heard of or seen before. Adherents of four religions hold this mountain to be very sacred, significant, and holy. These include Hinduism, Buddhism, Jainism, and the Bon religion. It essentially implies that billions of people worldwide hold this mountain very dear to their hearts.

For the Hindus, the mountain is believed to be the abode of Lord Shiva, who lived there with Parvati, his consort Goddess, alongside their children Ganesha and Kartikeya.

According to the Mahabharata, it is said that the Pandava brothers, along with their wife Draupadi, journeyed to the summit of Mount Kailash on their path to liberation from the life and death cycle, as it is deemed to be a gateway to heaven, also known as Swarga Loka.

According to Ramayana, it is said that Ravana tried to uproot Mount Kailash in retaliation to Lord Shiva. Shiva in turn, pressed his right big toe upon the mountain, confining Ravana in between. Surprisingly, while Mansarovar Lake has a deep religious significance, its opposite, Rakshas Tal Lake, was born out of the extreme rigidity shown by the demon King Ravana, as a mark of respect to Lord Shiva. The Rakshas Tal Lake is enriched with salty water and stripped of aquatic plant and marine life for its close assocation to a demoniac entity.

According to Vishnu Purana, Mt. Kalasha’s four faces are ruby, crystal, lapis lazuli and gold. It is a pillar of the world and is situated at the heart of six ranges signifying a lotus.

In Jain scriptures, Mount Kailash is next to where the first Jain in Tirthankara Rishabhadeva was able to attain the level of liberation (moksha).

As for Buddhists, they believe Mount Kailash is the abode of Demchok, the representation of bliss. Buddhists also take it to be the center of the Universe, and they call it Mount Meru. Buddhists walk for up to 1,000 kilometers in the capacity of a holy pilgrimage to this very sacred mountain.

In the Bon faith, which is native to Tibet, adherents say that Kailash is part of the holy nine-story Swastika mountain.

Why No One Can Climb Mount Kailash

Over the centuries, many people have attempted to reach the summit of Mount Kailash, but they ended in utter failure. This is strange as even taller mountains in the region like Mount Everest, have been scaled by mountain climbers from various parts of the globe.

Here are some of the reasons that have been adducted for the inability of humans to reach the summit:

For most religious people, the main reason humans have not been able to scale Mount Kailash is simply that it is the Gods’ abode. The deities have taken it upon themselves to protect and defend the mountain’s sacredness by ensuring that no one can climb it. Recall at this stage, that this mountain is considered to be the home of the powerful Hindu God Lord Shiva.

Those who hold on to this line of explanation strongly believe that many spiritual forces converge on the mountain. The religious significance that the mountain holds means that climbing it is virtually impossible. People avoid trespassing the sanctity of the hill and disturbing the divine forces residing there.

According to lore from Tibet, only a monk called Milarepa was able to reach the peak. When he descended, he issued a major warning to everyone never to climb the cliff to not constitute a nuisance to the God living high up in the summit of Mount Kailash.

As the peak is also believed to be the area where heaven meets the earth, it holds profound religious significance. For many, climbing it will be a severe taboo or denigration of several religions. That alone is enough to deter you from even attempting to ascend it.

Another factor that makes it impossible for you to scale is the mountain’s structure or shape. Take its north face; for example, it juts out at about 6,000 feet. It is so challenging that experienced English mountaineer Hugh Ruttledge declared out of frustration in 1926 that the north face of Mount Kailash was merely impossible to climb. He would later lead two expeditions to Mount Everest in 1933 and 1936, but he never scaled Mount Kailash.

Ruttledge was exploring the region with Colonel RC Wilson. When they started to see if they could climb from the southeastern ridge, a hefty snowfall because and it became impossible for them to ascend.

With its sheer walls of ice, very steep and dangerous slopes alongside unpredictable snowfalls and avalanches, it is understandable that many mountaineers reject even an attempt at the peak.

In the mid-1980s, China’s government gave legendary Italian mountaineer Reinhold Messner the approval to climb Mount Kailash, but he turned it down. This is a man who shattered records as the first climber to scale all fourteen peaks above 8,000 meters, but when it came to Mount Kailash (which is much shorter at 6,638 meters), he promptly rejected the offer. This mountain is so risky for climbers that even for pilgrims who visit it every year to circumambulate it at its base, only a few of them can even go around it.

Mount Kailash is located in a region under the Chinese government’s jurisdiction, and it is believed that the government has banned all forms of climbing activities on Mount Kailash. This became apparent in 2001 when a group of Spanish climbers had attempted to climb the revered peak.