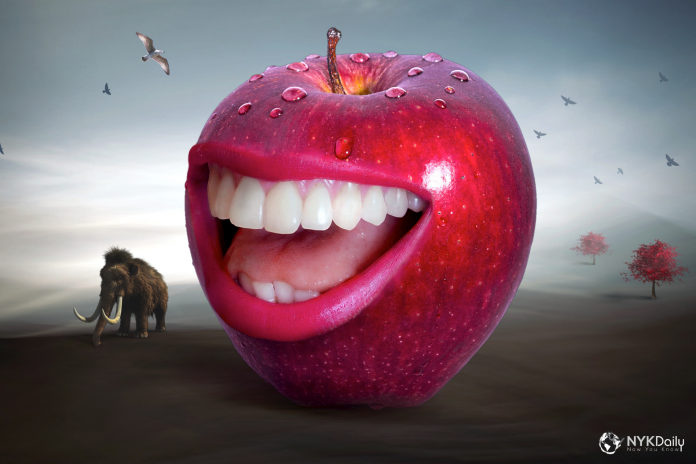 When compared with other mammals’ teeth, one thing that is instantly noticeable is that our teeth are relatively smaller. The tiny teeth size with the overall body proportion has baffled scientists for a long time, but new researches shed more light on this.

Teeth have come a long way on the evolutionary path. It is interesting to know that the earliest teeth were not even the stumpy structures we know them to be today. They were rough plates seen in ancient fish 400 million years ago and they made use of these teeth’ rough surfaces to cut and shred food.

Even these tooth plates in ancient fish also evolved and did not get established as once. It grew with time due to the piling up of toothlike tissue in line with the fish’s growth. With the growth in the fish’s size came the appearance of structures that resembled teeth, then they accumulate upon the sides of the growing tooth plate. In this ancient fish (specifically Romundina stellina), the first animals were seen to have what can be called teeth.

The evolution of teeth continued with mammals and, of course, that includes humans. So the evolution can be said to have commenced with a bed of rough, toothlike material to sophisticated dentition today of roots that have a core of sensitive dentine and an extremely durable surface made up of enamel.

The Place of the Wisdom Tooth

The third molars of human beings are referred to as wisdom teeth, and in many people, they do not even erupt at all into the mouth, and in some other people, they do not even grow. In cases where the wisdom teeth do erupt, they are typically removed. This is because they are often associated with various kinds of dental problems. Over time and due to evolution, wisdom teeth have reduced considerably in size, and how this happened will be discussed in detail below.

Evolution and the Small Size of Human Teeth

That our teeth are as small as they are today can be explained by evolution. In February 2016, a new study was formulated, and it convincingly explained how this happened. Even though today’s humans are the only members of the human evolutionary family tree to have survived, other members of the family tree (called hominins) once roamed the earth too, but they are all extinct now.

Studies in dental anthropology and evolutionary biology showed clearly the reduction in the size of human teeth over time. Even though hominin fossils are exceedingly rare, whenever they are found, they are often teeth remnants. This is because the teeth are made from enamel, the hardest parts of our bodies.

The most exciting thing is that earlier studies by scientists explained that this remarkable shrinking in the human teeth’ size was due to the adoption of cooking and other dietary changes seen only in humans.

The use of tools meant that modern humans do not need their teeth to be massive, as seen in the extinct hominins. This could be the trigger for evolutionary pressure to devote fewer resources and less energy for the development of teeth, leading to a reduction in our teeth’ size.

Probably the most fantastic thing about the evolutionary process is that it never stops, and as you are reading this, it is continuing. Of course, the changes are too minute to notice; what is certain is that humans on earth will have radically different teeth from what we have now a million years from now. If we complain that our teeth are too small today, then humans in the distant future may not even have teeth to talk about.

Since the advent of tools by early humans led to a drastic reduction in our teeth’ size as a result of the evolutionary process, our dentition can only get smaller with time. The use of sophisticated tools and radical changes in dietary behavior meant less need to use teeth. An explanation was given regarding this in the sections earlier.

Scientists have noticed that even in humans today, the reduction of teeth due to evolution has gotten to the stage where even the wisdom teeth are not developing at all, and the rate for this failure of growth is increasing.

Since humans have adopted cooking, food has become a lot easier and stress-free to consume. That implied that there was no need for super-sized teeth like the ones seen in the extinct hominins. The pattern in the evolution of hominin teeth is relatively straightforward, and as long as the dominant factors remain in place, the teeth will keep shrinking.

Evolutionary biologists and other scientists keep studying this exciting phenomenon. Apart from understanding how much evolution has impacted the human race, scientists also try to extrapolate what will happen in the near future.

Based on studies done so far, it is safe to conclude that human teeth are so small as a result of evolution. However, what is even more interesting is that the process has not stopped at all. Hence, humans should not even think of when they will have more massive teeth, for that will never happen.