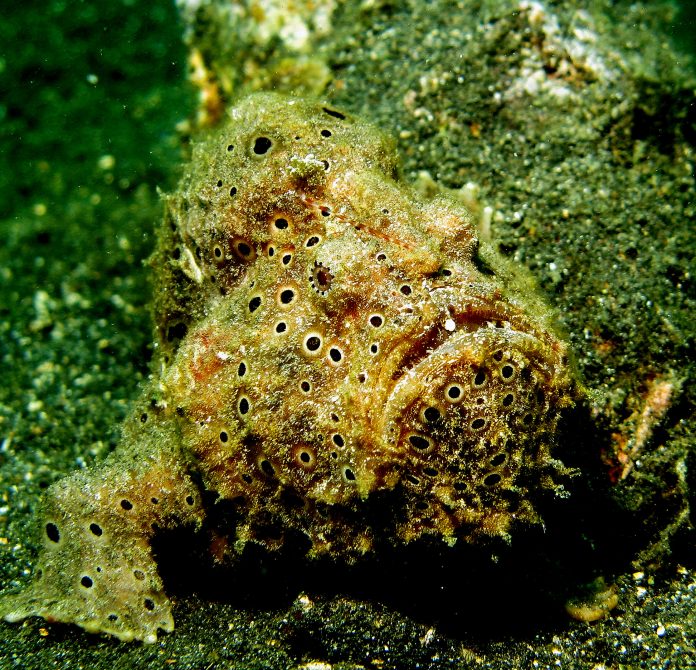 The frogfish’s name in the scientific community is the Antennariide. So what is a frogfish? A frog or a fish? Well, it is indeed a fish, but why the name? The frogfish’s skin matches those of a frog, and its legs (a unique feature for a fish) look like what a frog has. Also, the way they both squat in other terms stand; it looks almost indistinguishable. But the most important reason for the animal’s name is because of how both animals hunt. We will explore that a bit later in the article.

The hairy frogfish, Antennarius striatus, is a unique kind of frogfish that is one of the most famous underwater subjects to explore.

The hairy frogfish is a kind of fish that’s enveloped in spines. These spines, which mirror strands of hair, allow the marine wonder to camouflage itself against seaweed and coral. Located in warm waters worldwide, the hairy frogfish can also alter its color to mix in with its surroundings.

These animals may be one of the best at hiding in plain sight. However, they do something that makes them stand out from a lot of other sea creations. The fish—which generally evolve about four inches long—don’t swim. Instead, they walk on their wide fins on the seafloor as they look for meals to eat.

What do they eat?

When it comes to snacks, hairy frogfish are fond of almost everything that moves or grows. They chow down flounder and other fish, such as crustaceans. These lads sometimes sneak up on their prey. But other times, they make their meal come to them. Hairy frogfish has a unique extra-long spine on their dorsal fins that resembles a worm. Waving this bait back and forth in front of their muzzles can entice a target within striking distance. Talk about being caught in a hairy situation!