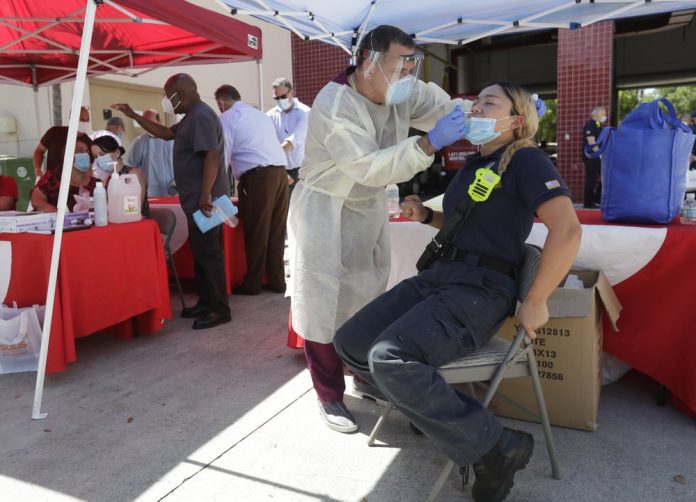 The torrid coronavirus summer across the Sun Belt is easing after two disastrous months that brought more than 35,000 deaths. Whether the outbreak will heat up again after Labor Day and the resumption of school and football remains to be seen.

Seven of the nine states along the nation’s Southern and Western rim are experiencing drops in three important gauges — new deaths, new cases and the percentage of tests coming back positive for the virus. Alabama is the only state in the region where all three numbers rising; Mississippi’s deaths are up, but positive rates and cases are dropping.

In Florida, where reported deaths from COVID-19 are running at about 114 a day on average, down from a peak of 185 in early August, Gov. Ron DeSantis announced Tuesday that he is easing the state’s 5-month-old ban on visitors to nursing homes.

“Part of having a healthy society is understanding that human beings seek affection,” DeSantis said, his voice cracking at times as he wondered aloud whether his actions had contributed to the suffering by separating the elderly from their loved ones. He paused for about 20 seconds to collect himself.

The governor also said the number of people in Florida hospitals with COVID-19 is down nearly 60% from its peak in July and that newly confirmed cases on Monday dropped below 2,000, the lowest daily total since mid-June.

The U.S. leads the world in coronavirus deaths and confirmed infections after a spring outbreak centered around New York, followed by the summer flareup across the Sun Belt.

As of Tuesday, there were more than 25.3 million confirmed cases and over 850,000 deaths worldwide, according to the tally by Johns Hopkins University, with the U.S. accounting for more than 6 million infections and 183,000 of the dead.

About 68,000 of the U.S. deaths have come since the start of summer, with the number of infections among Americans nearly tripling during the same period.

“It’s been a summer of fire, not ice,” said Dr. William Schaffner, an infectious-disease expert at Vanderbilt University in Nashville. “If anything, we’ve learned that this virus is even nastier than we thought it was in the spring.”