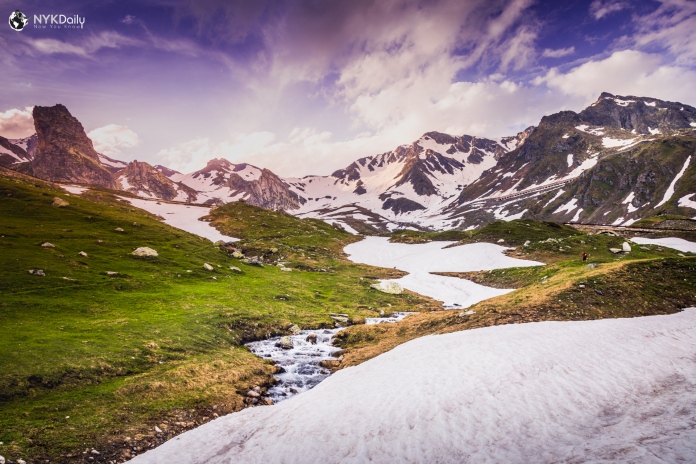 Great St Bernard is one of the oldest passes through the Western Alps, with the sign of use as far back as the Bronze Age and remaining traces of a Roman road.

It joins Martigny in Valais’ canton in Switzerland with Aosta in Italy. It is the lowest pass lying on the Mont Blanc, Alps, and Monte Rosa mountains elevation.

This is where the St Bernard dog’s legend was born, at 2473m on the Great St Bernard pass between Italy and Switzerland. So dangerous was this transalpine passage that monks had already built a hospice on the path in the 11th century to present spiritual aid and to save travelers lost in the snow. The dogs helped and rescued lost souls until the 1950s when helicopters were introduced.

Nowadays, travellers make it as far as this magnificent alpine pass, which is well worth a visit if you love walking with big dogs (you can go for a stroll with a St Bernard in summer!), isolated border crossings, hiking, hilly mountains, and the outdoors. Most whizz over the Swiss–Italian border far below in the 5.8km-long Tunnel du Grand St-Bernard, which opened in 1964 and took practically all the cross-border traffic away.

Things to do at Great St Bernard Pass:

In summer: Explore the botanical gardens, scooter down the mountain, sweat it out on the hung boardwalk, relax at one of the swimming pools, enjoy an outing on a paddleboard, or peddle-boat, or meet the dogs who live their summers on the Saint-Bernard Pass!

In winter: Don’t forget to visit the ski slopes, work up a sweat cross country skiing, take a chairlift to hill restaurants and enjoy a meal facing the world’s best panorama, skate on ice-rinks, relax at the indoor pool and discover the cultural and historical heritage of this address!

Sports: Snowboarding or Skiing are the two more prominent winter sports, and there are lots of ski resorts in this area. However, there are many more choices, such as cross country skiing, snowshoeing, ice climbing, or ice-skating. If you have the mone, Heli-skiing is accessible in the winter, and you don’t have to be a skilled skier to enjoy back-country territory via helicopter.

Grand St Bernard Museum: The display at this museum, in the same building as the Auberge de l’Hospice on the Col du Grand St-Bernard, tells the complete tale of this remote mountain pass, unreachable by vehicle for half the year. Accessible in summer, tickets are valid for both the dog kennels and museum, with lots of St Bernard dogs to see. They’re overfriendly and always ready to take a walk with you. There have been cases of humans not leaving the museum because of the bond they develop with dogs. Why am I not surprised?

What to eat at Great St Bernard Pass?

While you can get the more traditional Swiss dishes such as Rösti and Fondue, there are also some local dishes specific to the regions around Great St Bernard, which you should try:

Raclette — Raclette is a fantastic kind of cheese. Half a cheese is held under a heating component until the top melts. The molten part is then removed. It is then served either with a piece of bread, potatoes and accompanied with pearl onions and gherkins.

Käseschnitte/ Croûte au fromage — A slice of bread soaked in Fendant wine, then baked with pounds of cheese on top. Often the cheese picked for this is Raclette cheese, and the dish is served with an egg or ham on top.

Apricots — The area is known for its apricots. During the season (around May-July), local apricots are sold along major roads and supermarkets.

Cholera — Cholera is a covered pie made of leek, potatoes, cheese, and apples. The world’s origin is disputed: some say that it was a staple during a cholera epidemic in the 18th and 19th century, but it might just as well be stemmed from the word “chola” for coal, the local German dialect representing how it was prepared in the past.

Our ancestors were relatively innocent.

Just like the rest of Switzerland, the Valais is mostly a very safe place. As this is a hilly area, there are, however, some other risks:

Avalanches are a severe danger in spring and winter. Marked slopes in ski resorts are safe. When skiing outside of those, the official avalanche bulletin should be consulted without fail.

You might find warning signs, not to enter the river. They are placed along rivers below hydroelectric power plants and should be considered. The rivers usually have slow-flowing water, but can swell to fill much of the space between their banks within a short time when water is released.