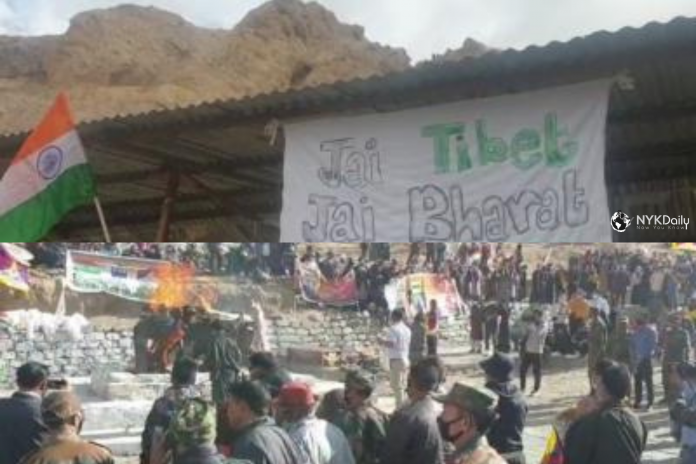 Subedar Nyima Tenzin, the Special Frontier Force (SFF) officer martyred in a military operation on the south bank of Pangong Lake, was laid to rest at Leh with full honours on Monday.

The Tibetan-origin officer sacrificed his life during a pre-emptive operation the Indian Army carried out on the southern bank of the Pangong Lake in eastern Ladakh last week to foil a fresh move by the Chinese People’s Liberation Army to transgress into Indian territory.

The moment an army truck with Tenzin’s mortal remains left his home in the Tibetan settlement of Choglamsar, close to Ladakh’s capital Leh, people joined the funeral procession on their bikes and vehicles. Many chose to walk beside the truck waving the Indian tricolour as well the Tibetan flag.

The coffin was draped in both the tricolour and the Tibetan flag. A guard of honour was given and officials from the army and civil administration laid wreaths.

When the last rites were performed, locals started singing the national anthem and Tibetan nationalist songs.

Following the protocol for those killed in action, Indian Army troops folded the two flags and handed them over to Tenzin’s wife.

Tenzin had 33 years of service in the SFF. He leaves behind his wife and three children.

This is the first time a Tibetan’s sacrifice is known to all of India. Tenzin Yangkey, a student, said that they came to the funeral to pay tributes to a man who sacrificed his life for India. “We are all proud of him,” Yangkey said.

During the operation, another junior soldier Tenzin Loden, 24, was critically injured in the same explosion, and is currently undergoing treatment at the military hospital in Ladakh. The injured Tenzin Loden is from the same settlement.

India and China are currently locked in a four-month-long military standoff at the Line of Actual Control in eastern Ladakh. Despite several rounds of dialogue, there has not been any breakthrough and the deadlock continues.

On June 15, as many as 20 Indian soldiers and an unknown number of Chinese troops were killed in a violent clash in the Galwan Valley.