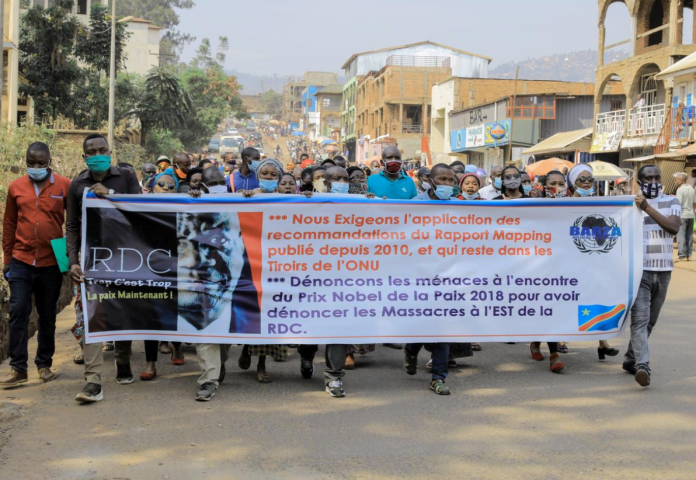 A city in eastern Congo has rallied in support of Denis Mukwege, the Congolese Nobel Laureate who received death threats in recent weeks after he called for justice over serious human rights violations.

On Thursday his supporters snaked through the streets of Bukavu, the lakeside home of the doctor who has helped thousands of survivors of sexual violence, honking motorcycle horns, singing and waving signs like “Don’t touch our Nobel Prize.”

Mukwege has won international recognition, including the 2018 Nobel Peace Prize, for his decades of work treating female victims conflict in the east of the Democratic Republic of Congo.

Last week the United Nations said his life was in danger after he and his family received death threats via social media and by phone.

Alongside his medical work at Panzi hospital in Bukavu, Mukwege has long been an advocate for prosecuting armed groups responsible for the endemic sexual violence in eastern Congo.

“Our sisters in the forest got raped and ruined. Some completely lost their wombs, and some carried their wombs in their hands,” said Safina Kusimwa, one of the demonstrators.

“Mukwege put all his efforts into rescuing these women… we do not want to see this. They should leave him in peace.”

On August 24 he commemorated the anniversary of a 1998 massacre in Kasika where, he said in a statement, “more than a thousand civilians, including many women as well as children and babies” were killed, and “most of the women were raped, tortured, and had their genitals mutilated.”

“Without truth and justice there will be no lasting peace in DR Congo and neither the victims nor the torturers will be able to rebuild a peaceful future for future generations,” Mukwege said.

On Thursday the marchers called on the government to protect Mukwege, who narrowly survived an assassination attempt in 2012.