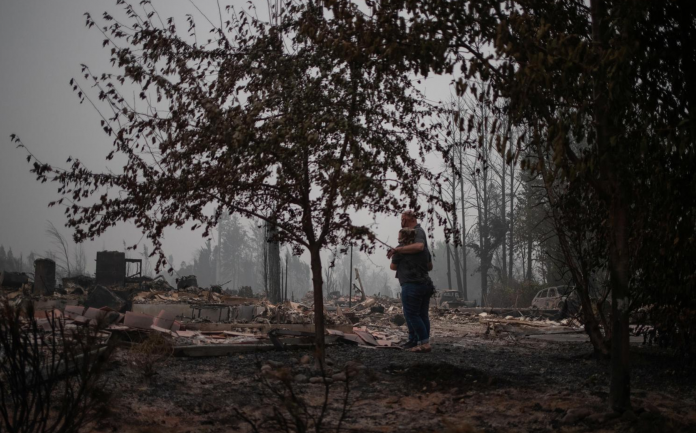 Tracy Koa, a high school teacher in Oregon, was in her classroom last Tuesday preparing for the first day of school – which would be online due to COVID-19 – when her 13-year-old daughter called in alarm: A fire was coming, and they had to evacuate, now.

Koa raced home. From the driveway of her house in Talent, Oregon, she watched the cloud of smoke from the nearby wildfire turn to black from gray, a sign she knew meant homes were aflame. Within minutes, Koa, her partner David Tanksley and her daughter Seneca had packed their car with camping gear and their cat and joined a crawling line of traffic to evacuate.

It was one of hundreds in Jackson County, Oregon, which has a population of about 220,000, that were reduced to rubble this week by the Almeda Fire. At least ten people have been killed in Oregon, and the death toll is expected to rise as conflagrations rage across the U.S. West.

Koa and Tanksley returned to Talent on Saturday with dread.

“We knew that it was gone,” Koa said in a telephone interview on Sunday. “But then you pull up, and the devastation of just every home – you think of every family and every situation and every burned-down car, and there are just no words for it.”

Thick smoke hung in the air over the blackened trees and the ground was littered with pieces of roof tiles and house foundations. In the pile of debris that was once their home, Tanksley dug out a small Buddha statue, surprisingly intact, that belonged to Koa’s daughter since she was a baby. Koa clasped her hands in gratitude.

Some items had endured, although charred; the metal planter pot in the living room, the neighbors’ red Adirondack chairs, a pile of blackened coins that had outlived a glass jar. Other precious possessions seemed to have evaporated, such as the crystal milk pitcher that belonged to Koa’s grandparents, where she had placed roses just the other day, and the photos of her mother who died of bone cancer in June.

For Koa’s family, like many others, the year had already been hellish because of the COVID-19 pandemic before the inferno arrived.

Koa and Tanksley had recently decided to relinquish the lease on their house in Talent because Tanksley, a consultant, lost work as the economy imploded and they could no longer afford it. They had been planning to move to a new mobile home in Medford Estates, a few miles north, this weekend.

“We were feeling like, we’re finally going to be okay through all of this,” Koa said.

But the fire destroyed their home in Medford Estates too. A lot of their soon-to-be neighbors in the mobile home park were elderly and did not have cars, which made Koa fearful that they had not gotten out.

“There was absolutely no warning at all,” she said.

On Sunday Koa and Tanksley were planning to buy a trailer and then figure out a plan. Koa said she was eager to find ways to support her students, many of whom she expected had lost their homes and their school-issued laptops, thus complicating an already challenging start to the school year.

“We’re going to be okay. We’re together, we’re happy, we have support from family and friends,” Koa said. “Now let’s get ourselves situated so we can start helping other people.”