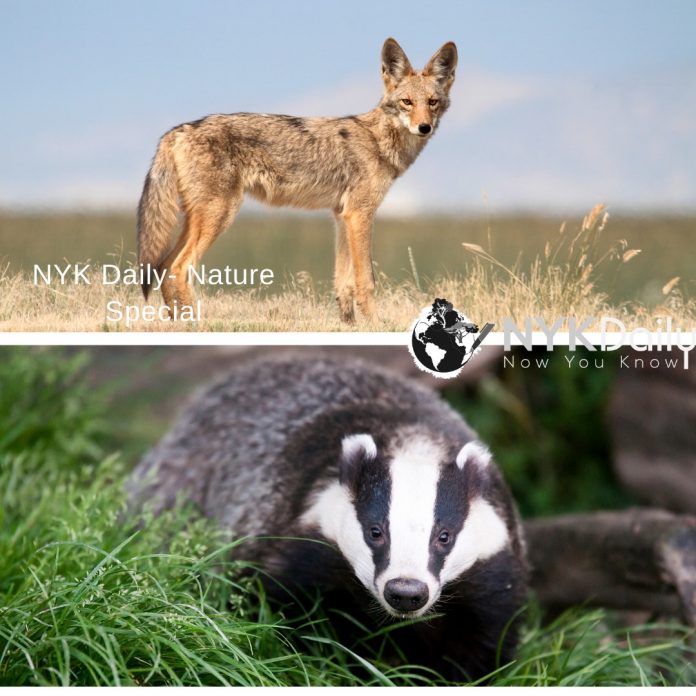 This is part-4 of the symbiotic relationship series. Part-3 explored the Symbiotic Relationship between Clownfish and Sea Anemone.

Coyotes and badgers are fascinating animals on their own. However, what many are not even aware of is the symbiotic relationship that the two have together. Also called the brush wolf or prairie wolf, the coyote is an animal of the canine family, and it is native to North America and is also seen in Mexico and Central America. It is mainly carnivorous and feeds on rabbits, rodents, reptiles, birds, deer, fish, and amphibians. Badgers are omnivores with short legs used for digging. Badger species are found in different parts of the globe.

In the year 1992, scientists at the Department of Wildlife and Fisheries Biology of the University of California were carrying out interesting research. At the end of the academic exercise, they concluded that coyotes and badgers become partners for the sake of hunting. Even though the scientists made their discovery in the early 1990s, it was not new to the locals.

The Native Americans already knew for hundreds of years that coyotes and badgers had always hunted together. Those who have observed over time noticed that you stand a higher chance of seeing coyotes looking for food with badgers instead of hunting with their fellow coyotes. Overall, coyotes do not form strong family units, and they prefer to be solitary.

It is sporadic to see coyotes hunting in groups, and to make things worse for the coyote, the flat topography of the prairie or the desert does not make it easy for it to deploy stealth when tracking prey.

Why Coyotes and Badgers Hunt Together

The symbiotic relationship between coyotes and badgers serves an important function. When the badgers and coyotes decide to collaborate, they can adequately track prey. This is especially true for animals that burrow like the ground squirrels and prairie dogs.

By working together, the coyotes and badgers can divide their tasks and operate with maximum efficiency. For example, if the prey is located on the ground surface, it will be the coyote’s job to run after it until it either gets tired or it goes underground. Once the prey slides underground, the badger will take over and continue the hunt below the ground.

Hence, these two animals collaborate and can record more success by working as a team. The reason why the relationship is called symbiotic is that it is of benefit to both of them. If the badger decides to go it all alone, it will not record much success, and the same goes for the coyote. But when the two decide to hunt together, there is a dramatic rise in their chances for success. Studies have shown that whenever the badger collaborates with the coyote, the number of ground squirrels that they can catch increases by as much as one-third.

Benefits of the Symbiotic Relationship

Apart from the apparent increase in the amount of the kill, there are some other advantages of the collaboration between the badger and coyote. But this is not the say that the badger and coyote are friends. They are not friends or buddies at all. They are merely working together to get some meal. In the real sense of it, they compete for the same animal. Here are some other benefits of their hunting relationship:

By working together, the badgers and coyotes save energy. The prey is also brilliant and can be very swift. The collaboration ensures that the work is shared, and energy can be saved for both beasts. While the coyote focuses on hunting above the ground, the badger concentrates below the ground. Since they do not get tired quickly by working in pairs, they can last longer on their hunting trips.

Taking Advantage of the Other

Coyotes and badgers are gifted differently. The coyotes have excellent eyesight, which is useful for spotting prey when compared with the badgers. On the other hand, badgers have a better sense of smell, and they use this when sniffing out prey from below the ground. So, they take advantage of these skills. As the badger is focused on digging for the ground squirrel, the coyote stands guard on the surface. Immediately the terrified squirrel tries to escape from the hole from the menacing claws of the badger. The coyote goes into action by merely pouncing on the helpless squirrel. As we can all see, the partnership makes a lot of sense.

In some other instances where a starved coyote is after a prairie dog, the badger can also enjoy some of the meals, but it has to work for it. The prairie dog immediately scurries into the burrow; the badger will move to the edge of the hole and dig swiftly.

In some other cases, you can have the coyote doing a patrol of the area, which means the rodents will prefer to remain in their holes or underground tunnels. That means the badger has a better chance of sniffing and digging them out.

This symbiotic relationship is featured in the exciting folktales of the Native Indians. It is a superb illustration of what teamwork and cooperation can lead to.