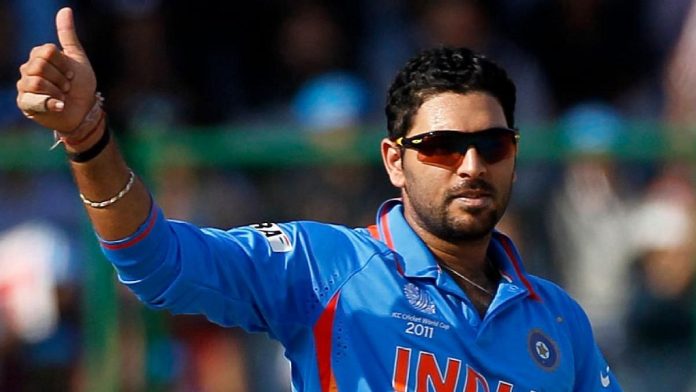 After 17 years of non-stop international cricket at the highest level, the veteran all-rounder ignominiously called it a day in June last year. When he walked off into the sunset, his statistics read 402 matches, 11,778 runs (with 17 tons and 71 fifties), and 148 wickets.

The 19-year-old made his international debut against Kenya at ICC Knockout Trophy – 2000, but he didn’t get a chance to bat in that match. It was his 84-run knock off 80 balls against the deadly Aussie pace attack of Brett Lee, McGrath, and Gillespie, that captivated the attention of selectors and cricket fans.

But his success was very short-lived. He scored just 69 runs from 6 innings at Coca Cup in 2001. It was all over for him, as selectors’ interest stuck to the new blood left-handed duo of Dinesh Mongia and Hemang Badani.

Yuvraj Singh had worker very hard to regain his form. It was only his 209-run knock for North Zone against South Zone in a Duleep Trophy – 2002, that forced selectors to bring him back in the final two one-dayers against Zimbabwe at home. It paid off as the all-rounder hit consecutive knocks of 80 and 75 that helped India clinch India-Zimbabwe series 2002 with a 3-2 lead.

Yuvraj never looked back since then before becoming the part and parcel of the Indian cricket team at both home and overseas series. However, his statistics never revealed his match-winning abilities and gutsy attitude.

Chasing England’s 326, India were struggling for 146/5 at one stage, with India still needing 180-odd runs to win the match. Yuvraj Singh scored 69 and added 121 runs for the sixth wicket that helped India clinch Natwest Trophy 2002. Yuvraj Singh finished the tournament with 244 runs from 7 matches at an average of 49.

In India’s tour of Pakistan, Yuvraj Singh amassed 344 runs in 5 innings at an average of 172. The southpaw scored 87, 79, and a gusty 107 in the final match helping India clinch the trophy in 2006. He was adjudged player of the tournament for his fabulous performance with the bat.

Yuvraj Singh had a fabulous performance with the bat scoring 362 runs and chipping in 15 wickets as well at ICC Cricket World Cup 2011 from 9 matches at an average of 90. He played a pivot role throughout the series with four fifties and a ton. His 113 and 57* against West Indies and Australia respectively were the key highlights of his batsmanship under pressure.

He was adjudged player of the tournament for his awe-inspiring performance at ICC World Cup 2011. But, the dashing all-rounder’s cricket career was cut short due to lung cancer. However, like a true warrior, he overcame all odds after one-and-a-half years of rigorous cancer treatment at Boston, US.

In 2017, Yuvraj Singh returned to the Indian squad after a three-year sabbatical. He looked in sublime touch throughout the bilateral series between India and England. Yuvi scored 210 runs from 3 innings, including a career-best 150-run-knock that helped India clinch the trophy. But this happened to be the last leg of Yuvraj Singh’s glorious career.

Soon, a couple of years later, Yuvraj Singh lost into the oblivion, following which he decided to call it quits. It’s impossible to encapsulate the legacy of Yuvraj Singh’s magnificent 17-year long cricket career in a few sentences.

As a true warrior, Yuvraj Singh withstood all tides of time including his marathon fight against lung cancer. However, a couple of big disappointments in Yuvraj Singh’s career are; he couldn’t score 10,000 ODI runs, and didn’t get a chance to represent India in 100 test matches.

From an unexpected comeback to the national side in 2002 to a world cup win, and then battling against lung cancer, it was a stunning roller-coaster ride for India’s most dependable left-hander.