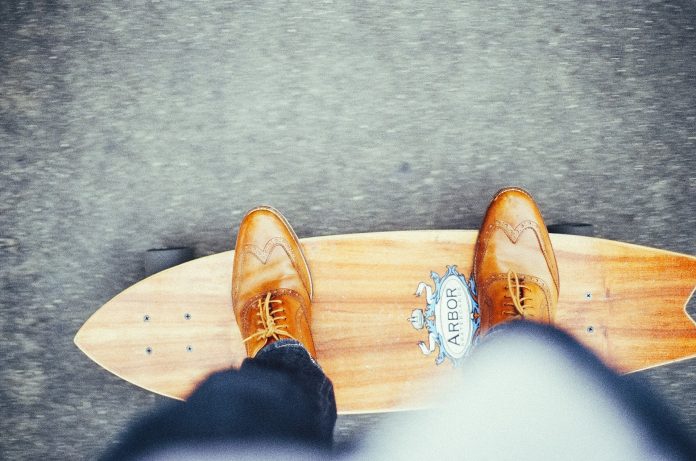 Skateboarding is synonymous with style and DIY ethics. Even from its humble beginnings, skateboarding has always been a culture all its own.

No doubt about it, the progression and DIY ethic of skateboarding itself helped shape the style of skate shoes. Although, not in the way you would think.

It created an eclectic history of skate shoes inspired by trends outside the sport.

From Chuck Taylors to DC Shoes, we’re breaking down the history of skate shoes that helped define the culture of skateboarding.

Sidewalk Surfers to Skateboarders: The Era of Minimalism in Skateboarding

Looking for ways to feel the sensation of carving into waves, surfers of the ’50s used roller skates and attached them to wooden boards. The goal was easy: to experience surfing on the streets.

As a result, as the sport evolved into the ’60s and ’70s, the sport was all about feeling the board, like surfing. Sidewalk surfers stuck to traditional gorilla grip with a barefoot style.

Meanwhile, kids coming to the sport outside of surfing longed for a shoe to skate in. By 1965, the National Skateboarding Championship in Anaheim, California was televised.

A band of skaters rocked Keds and Converse Chuck Taylors. Their wheels roared in downhill slalom contests. They showed their style in flatland freestyle competitions.

These shoes were minimalist in function with canvas and rubber soles. They served a purpose to keep kids on their boards long before grip tape was used. Converse skate shoes were all the rage.

The trend of minimalism helped establish one of the most iconic skate shoe companies to this day, Vans skate shoes. No doubt about it, Vans were the most popular skate shoes of the ’70s. Even to this day, people still flock to the classic models of their shoe designs.

Like Converse’s Chuck Taylors there is something nostalgically classic about the style.

After the invention of the ollie by Alan Gelfand and later protected on flat ground by Rodney Mullen, skaters needed a shoe that could withstand the beating that the ollie posed to shoes. As a result, skate shoes became thicker, bigger, and bolder.

New companies like Vision Street Wear created a suede high-top with a special ollie patch, and Vans followed up with the iconic Steve Caballero Pro shoe which became the half cab. Meanwhile, other companies were trying to copy off other brands popular in the sport.

Out of this trend, Etnies released a shoe reminiscent of Ellesse sneakers designed with the help of Natas Kaupas. Other skate shoe brands, like Airwalk, tried to design skate shoes modeled after the Air Jordan 1.

These shoes were a stark comparison to the minimalist styles worn in the 60s and 70s.

Skateboarding Gets Technical: Skate Shoes Get another Minimal Makeover

As the 90s approached, skateboarding was evolving at a rapid pace, and skate shoes needed to catch up. No longer did skateboarders want heavy, hightop sneakers, they wanted to feel more connected to their slimmer boards due to flip tricks.

These shoes employed suede leather that could stand up to the constant beating of 360 flips and never-ending ollies. Sal Barbier’s skate shoe had the number 23 as a personal homage to Jordan.

In addition to skate companies taking up space, national brands like Adidas and Puma exploded onto the scene. At almost any street session you could see some kid wearing baggy jeans with Addidas Campus, Gazelle, or Superstars or some variation of suede Pumas.

At the end of the ’90s, skateboarding got its first air-infused skate shoe, thanks to skate great, Eric Koston. Skate shoe company éS Footwear released the Chad Muska signature shoe. It retailed for over $100.

Skateboarding Goes Big: How Skate Shoes Lost Their Minds in the Early 2000s

As more skaters started to design their own signature shoe models, skate shoes took a weird turn and became bulky again. Maybe it was the option to add bells and whistles that excited professionals during the shoe design phase.

Whatever it was, skate shoes became bizarrely over-the-top and bulky. Skate shoes went from minimal to thick tongues, air bubbles, and heavy-duty ollie patches. They had design features for laces and more.

Standout shoes from the time include the Osiris D3, Stevie Williams Pro model for DC, and the Globe CT-IV.

After 2005, skate shoes became all about “feel” again. It appears that skaters finally had a shoe that was specifically designed for them to feel their boards as the sidewalk surfers intended long ago.

With the rise of Nike SB, skateboarding is back to its roots. Modern skate shoes have a sleeker, slimmer design. These designs help skateboard feel every flip, every grind, every ollie.

With the popularity of Nike SB in the sport, other major brands like New Balance and Adidas have hopped on the bandwagon producing their own line of skateboard shoes.

Skateboarding has always been at the forefront of innovation, experimentation, and a DIY ethos. Skate shoes are no different. It took some time to come back full-circle to the feel of the board again, but you have to admire the adaptability of skateboarders to find a path back home.

Embrace Your Own DIY Ethic by Creating Your Own Custom Shoes

Skateboarders aren’t the only ones who get the opportunity to design their own shoes, you can too! If you have a sneakerhead who loves having a pair of sneaks for every day of the week, why not offer the present of custom design shoes?

Nothing says thoughtful like a pair of one-of-a-kind sneakers.

Skate shoes sure have come a long way. Like the sport itself, skate shoes have gone through trial and error. Today, skate shoes are the inspiration of other brands. I can find nothing more fitting than that for the skateboard culture.