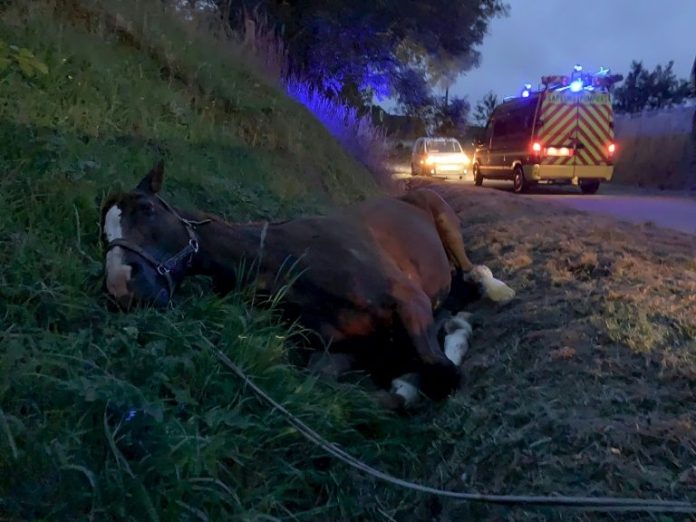 Didier Fruchet, owner of a horse club with some 80 animals outside Paris, looks with concern at his stables. “It’s stressful to be thinking, ‘what happened tonight?’ When we arrive in the morning we don’t know what we are going to find.”

He and other horse lovers across France have good reason to be worried.

Over the past weeks the country has been shocked by a succession of mutilations of over 150 horses that have seen ears sliced off, genitals cut and skin lacerated.

What is motivating the perpetrators remains a mystery. Hatred of animals? Inspiration by a warped sect? A macabre challenge spreading on social media? Or might the causes sometimes be natural?

Investigators have no firm leads. According to the authorities, the attacks are by multiple perpetrators whose methods vary nationwide, further complicating the picture.

Fruchet is taking no chances at his stables in the town of L’Isle Adam in the Val-d’Oise department north of Paris, which is also being patrolled by gendarmes as an extra precaution.

He has invested in hunting cameras with night vision that photograph moving targets. “We do not care how much it costs when it comes to keeping our horses safe,” he said.

The Val-d’Oise recorded its first cases on Saturday: Two mares, who did not die, were wounded, one with a cut in the vulva and the other a slash of 30 centimetres on its flank.

Reports have come throughout the summer, sometimes on an almost daily basis, of new horse mutilations across France.

Police at the weekend sought two suspects in the Cote-d’Or region after a stables owner reported an intrusion on his premises and said one horse had been wounded.

In a sign of how urgent the issue has become, a 40-member team of gendarmes, backed up by police dogs and a helicopter, were sent to the scene but so far have not found the culprits.

Police on Monday made their first arrest in the nationwide investigation, detaining a man suspected of an attack on three horses the central department of Yonne, who matched an image circulated.

But he was later released without charge.

Eloise Lang, a rider in Coueron in western France, is still distressed after her horse Ambitieux was attacked.

“I saw that he had a dozen traces of wounds… knife wounds… He had some on his shoulders, flank, chest. He had cuts that were up to a foot long,” she said.

“We hardly sleep anymore, we think about it all the time,” she added.

Similar acts have now been recorded in 20 of France’s departments.

“There are about twenty cases of cut ears, but there are also other incidents including genital mutilation and lacerations with sharp objects,” Colonel Hubert Percie du Sert of France’s  gendarmerie told AFP.

He said there were “many perpetrators and methods of operation.”

According to Interior Minister Gerald Darmanin, 153 investigations have been opened nationwide into cases of violence against horses.

France’s national anti-sect agency La Miviludes, which is assisting the investigation, has not found evidence of a satanic rite so far, “but it is not something we are ruling out”, du Sert said.

Authorities are also concerned that the repeated attacks and failure of the police to find the culprits risk creating paranoia, with some even deciding to take justice into their own hands.

In Quimper in the northwestern Brittany region, a mother, 52, and her daughter, 23, face a trial in January for threatening with weapons two people in a car whom they suspected of carrying out horse attacks after a licence plate circulated on the internet.

“They admitted they were equipped with a machete-type knife as well as a pellet gun, and to have stopped a vehicle when they had no right to do so,” the deputy prosecutor of Quimper, Emmanuel Phelippeau, told AFP.

They risk up to five years in prison if convicted.

“It is unacceptable that breeders, due to emotion, take the law into their own hands themselves”, the prefect of the Finistere region Philippe Mahe, told reporters, insisting that the police mobilisation was “very strong.”