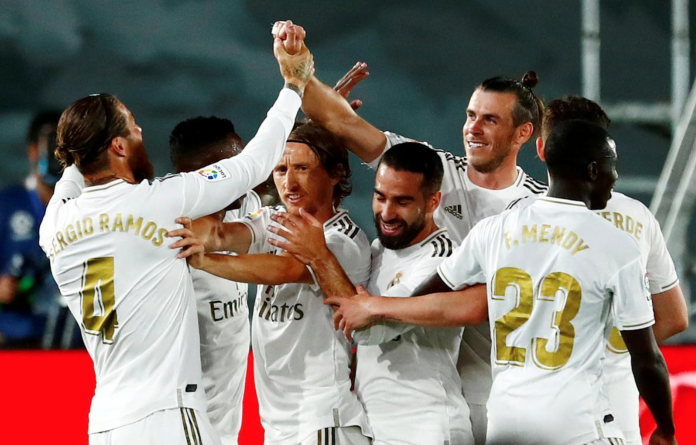 Real Madrid begin their La Liga title defence away to Real Sociedad on Sunday reeling from a long list of injuries and with a thin-looking squad after focusing more on forcing departures than securing new arrivals during a brief pre-season.

Coach Zinedine Zidane is missing seven players including Eden Hazard, Marco Asensio and Isco as well as Norwegian midfielder Martin Odegaard, who has returned from a loan spell at Sociedad and is the only new face in the squad.

Zidane’s selection shortages appear even more acute after he decided to cut loose a number of players from his squad, selling James Rodriguez and Achraf Hakimi while the club are on the verge of offloading Gareth Bale and Sergio Reguilon.

The coach will be forced to rely once again on evergreen players such as Sergio Ramos, Luka Modric and Karim Benzema, all over the age of 32, who carried the team to the title last season as they won 10 of their final 11 matches.

He will also be expecting a trio of thrilling yet raw youngsters in Brazilian forwards Rodrygo and Vinicius plus Uruguayan midfielder Fede Valverde to consolidate their places in the team after strong, if inconsistent, displays last season.

Madrid, who missed the first week of the season due to finishing the last campaign late, usually spend their pre-season campaigns on money-spinning tours of the United States playing against Europe’s top sides.

Yet they have had little preparation for the new campaign, playing just one friendly, a 6-0 win over neighbours Getafe.

Sociedad had a disappointing first game of the season as they drew 1-1 at Real Valladolid but should be lifted by David Silva making his debut, having joined the club as a luxury free agent after a glorious decade with Manchester City.

Elsewhere, Unai Emery targets a first win with new side Villarreal when they host Eibar after a disappointing 1-1 draw with promoted Huesca, while Valencia, in action away to Celta, look to build on last week’s thrilling derby win over Levante.

Barcelona, Atletico Madrid and Sevilla are also missing the second round of matches due to participating in last month’s Champions League and Europa League tournaments.