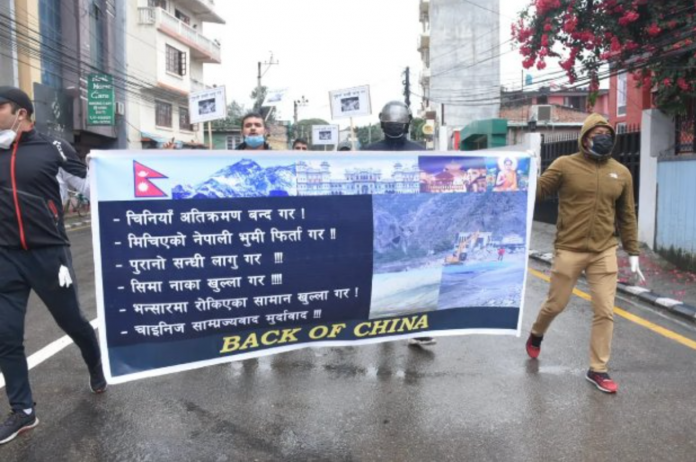 A number of protesters, including youths, chanted slogans against the encroachment and demanded that the Chinese leave Nepal’s territory immediately and respect the bilateral border treaty.

Some young protesters carried placards that asked China to back off.

Later, police dispersed the protesters who also demanded reopening of two border points between Nepal and China that were shut 10 months ago.

Tatopani in Sindhupalchok district and Rasuwagadhi in Rasuwa district have been shut, due to which imported goods and stuff worth billions of rupees coming in from China are stuck there.

On Wednesday, the Nepalese media had widely reported the construction of 11 cemented buildings in the Himalayan nation’s territory by Chinese security forces in a remote area of Humla district.

However, the Chinese Embassy maintained that the said buildings were verified to be on the Chinese side of the China-Nepal border and asked Nepal side to reverify its position.

The occupied area is remote from Nepal’s district headquarters concerned, difficult to reach, barren, unused and treacherous, but the Chinese can easily cross over due to close proximity and easy road access to it.