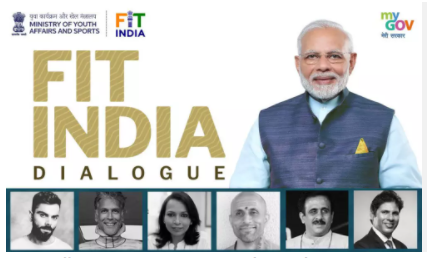 Prime Minister Narendra Modi interacted with fitness enthusiasts on Thursday after the completion of one year of the Fit India movement including cricketer Virat Kohli and Bollywood actor Milind Soman.

“Fitness is key to competition,” said the Prime Minister.

Modi said that during Covid times fitness has got a new definition and it has become a people’s movement, necessary for every age group.

“Fitness ki dose aadha ghanta roz” (A dose of fitness for half an hour daily), the PM said.

He said a family which plays and exercises together has an emotional bonding which has been proved during Covid times. He said he believes that the people will join the Fit India movement and asked experts to help the people in becoming fit.

During his interaction with Kohli, the Prime Minister asked him how he maintains his fitness?

“I can’t miss my fitness session,” the cricketer replied. Kohli said that demands in life have increased and fitness is most important.

The Prime Minister stressed the need for mental and emotional fitness and interacted with seven people from diverse fields from female football player Afshan to yoga guru and fitness experts like Mukul Kanitker and Paralympian Devendra.

Virat Kohli, captain of the Indian cricket team, on Thursday admitted that while the fitness standards of the side have improved, they are still behind when compared with other teams in the world.

While interacting with Prime Minister Narendra Modi during the Fit India Dialogue, Kohli spoke about the importance of fitness and proper diet to deal with the fast-paced nature of the world.

During the online session, PM Modi, among other things, inquired Kohli about the Yo-Yo test and whether the Indian skipper is also required to be part of the exercise.

“Sir, the test (Yo-yo) is very important considering the fitness point of view. When you’re looking at the global fitness levels and standards, our team’s level is still below that of the other teams. However, we are looking to take that higher, it’s a basic requirement,” Kohli said.

“T20Is and ODIs get over in a day. However, when you’re talking about a Test match, we have to play five days, play one full day, get back and return refreshed for the next day’s play. Considering this, the fitness benchmark is very important,” he added.

The Indian skipper further said he always takes the initiative and runs first for the test. “There is a condition, if I fail the test, I will also not be available for selection. I think this system and culture need to be set.

“Overall, the fitness level of the team is important. Our fast bowlers, who are the best in the world right now, are now able to give their full effort even on the 2nd, 3rd, and 4th days. We always had the skill, but in crucial moments, our performances used to dip. The opposition team used to win.

“These days, due to our fitness, we are able to capitalise on the crucial moments of the game. The results are coming because of this. This benchmark is very important for elite sportsmen,” he added.

In a candid moment during their conversation, the prime minister also questioned the India captain whether Delhi’s Chhole Bhature business is suffering, considering Kohli – who has now turned into a vegan — has been staying away from his favourite street food.

In response, Kohli broke into laughter and said during his growing days, he was eating bad and trying out a lot of street food but the demands of the sport helped him understand the importance of staying fit.

“We were discussing a few minutes back, our native diet, the food from our region, I have noticed we have not had any health issues with it. From my own experience, I have seen my grandmother, she is very healthy. She eats simple home-cooked food. When I was growing up, I used to eat a lot of street food. Whenever I used to go play, I used to eat outside a lot. From a health point of view, I realised it wasn’t good,” the 31-year-old said

“Physical fitness and diet, focusing on these things brought about the changes in me. Just like our sport, our lives have also gotten faster and demanding. If we are not keeping up with it then we will be left behind,” he added.

Kohli is currently leading Royal Challengers Bangalore in the United Arab Emirates in their quest for their maiden title in the Indian Premier League.