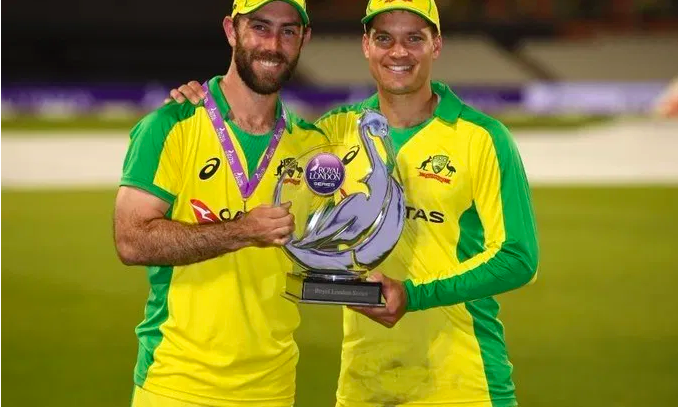 Glenn Maxwell and Alex Carey scored brilliant centuries as Australia won an exciting final ODI against England and took the three-match series 2-1 at the Old Trafford.

Chasing 303 on Wednesday evening, Australia were almost down and out of the game after losing five wickets for mere 73 runs. However, Maxwell (108) and Carey (106) shared a massive 212-run stand to help the visitors register a three-wicket win. The victory also ended a five-year streak in which England have not lost a home ODI series, with Australia also the last side to beat them, back in September 2015.

Earlier asked to bowl, the Aaron-Finch led side started the game in the best possible way, with Mitchell Starc removing Jason Roy and Joe Root with the first two balls of the match.

Jonny Bairstow, however, stood at one end even though England found themselves reeling at 96/4 following the wickets of Eoin Morgan (23) and Jos Buttler (8). Sam Billings, who came in next, shared a 114-run stand with Bairstow and the hosts looked to set up a big target before Billings top-edged a reverse-sweep shortly after reaching his fifty. Bairstow also fell just a few overs later having faced 126 balls for his 112, the opener’s longest innings in the format.

However, just like the second ODI, England’s lower order contributed with crucial runs as Chris Woakes scored an unbeaten 39-ball 53* to boost the hosts to 302/7.

Australia didn’t have the best of starts either and they lost Finch (12) and Marcus Stoinis (4) with just 31 runs on the board. The wickets slowed the innings down, and part-timer Joe Root’s introduction after the first Powerplay further slowed down the chase as he claimed the wickets of David Warner (24) and Mitchell Marsh (2) before Marnus Labuschagne was run out by Billings for 20 to leave the visitors in all sorts of trouble at 73/5.

Carey and Maxwell though proved to be their saviours as they both played positively and scored runs quickly to bring Australia back into contention. Maxwell in particular was destructive as he struck seven sixes in his 108.

Just when Australia looked to win, a late surge from England once again threatened to take the game away, as Maxwell and Carey fell in the 48th and 49th overs respectively, leaving Mitchell Starc and Pat Cummins needing to take Adil Rashid’s last over for 10.

However, Starc scored a six on the first ball of the over and then completed the chase with a sweep for four with two balls to spare.

Australia have picked 20 points from their first series of the ongoing ICC World Cup Super League, completing a 2-1 series win over England.

The five-time World champions have made a strong start to their campaign for the World Cup 2023 by winning their series against the defending champions. The top seven teams from the Super League and hosts India book direct spots for the 2023 World Cup.

England lead the points table with 30 points but are the only team to have played two series, winning 2-1 at home against Ireland in the opening series of the Super League, which has been introduced to bring context to ODI cricket.

Featuring 13 teams, the 12 Full Members and the Netherlands, who qualified by winning the World Cricket League Championship 2015-17, the Super League will see each side play four home and four away three-match series. The sides failing to qualify directly for the World Cup will get a second shot through a Qualifier.

Teams get 10 points for a win, five for a tie/no result/abandonment and none for a loss. Teams will be ranked according to total points earned across the eight series.