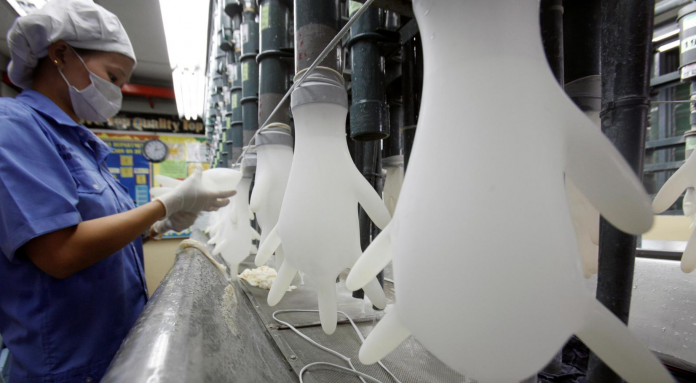 Malaysia’s rubber glove makers are struggling to meet soaring demand for medical gloves during the pandemic due to a shortage of workers, the industry’s trade association said on Friday, adding that it could cost the country dearly in export revenue.

The Malaysian Rubber Glove Manufacturers Association (MARGMA) estimated that the industry could have lost around 7.6 billion ringgit ($1.85 billion) revenue for Malaysia due to labour shortages.

MARGMA had revised its forecast for export revenue up by 36.7% to 29.8 billion ringgit, and export volumes up by 9% to 240 billion pieces of gloves this year.

President Denis Low said MARGMA members are facing challenges in meeting demand from around the world “and the major stumbling blocks causing the bottleneck are the huge shortages of workers and raw materials.”

“We plead with our Government to allow reasonable number of foreign workers to work in our factories,” Low said.

MARGMA said the industry’s strict rules on over-time is also holding back productivity.

It said members “do not wish to be accused of forced labour”, but migrant workers have requested to work longer hours to earn more wages to send back to their families.

“Workers are equally affected by the COVID-19 pandemic and wish to earn more wages to protect their own families,” Low said.

The United States Customs has in the last 12 months placed detention orders on two Malaysian glove makers, including the world’s largest Top Glove Corp TPGC.KL, on the grounds that they were suspected of using forced labour.

Top Glove said this week that it continues to work with U.S. authorities to lift the detention order.