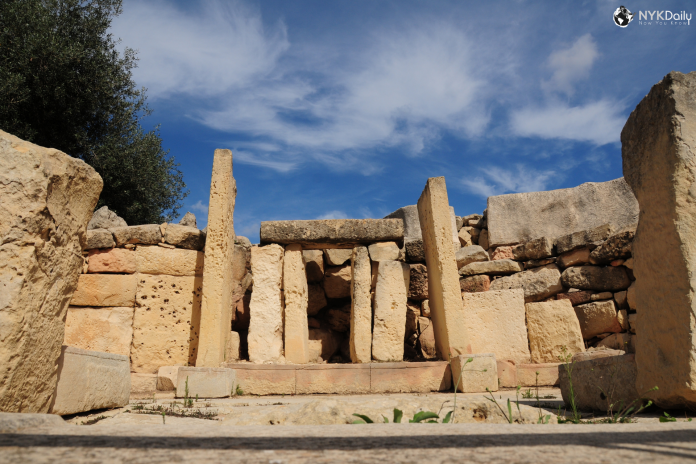 The Megalithic Temples of Malta are numerous prehistoric temples, some of which are UNESCO World Heritage Sites, constructed during three distinct periods, between 3600 BCE and 2500 BCE in Malta. They had been claimed as one of the oldest free-standing structures on Earth. Excavators believe that these megalithic complexes are the outcome of local innovations in the process of cultural evolution. This led to the construction of several temples of the Ġgantija period (3600BCE–3000 BCE), ending in the gigantic Tarxien temple complex, which remained in use until 2500 BCE. After this date, the temple building culture mysteriously disappeared. Let’s look at the history, records, dates, and the mystery behind these temples.

What does Excavations Reveal About Megalithic Temples of Malta?

Animal, but not human bones have been found in the temples (suggesting animal sacrifice) and mushroom-shaped shrines and other proposed ritual furnishings. The mushroom-shaped shrine has an uncanny resemblance to Siva Lingam from Hindu Faith. The lingam is a whole symbolic description of the formless Universe Bearer – the oval-shaped stone is the representation of the Universe, and the bottom base symbolizes the Supreme Power that contains the entire Universe in it.

Malta to India is approximately 4000 miles, and I have no idea how two similar shrines were worshipped 5000 years ago, 4000 miles apart.

Notable among the discoveries are many female figurines. For example, at Tarxien, archaeologists found the lower portion—skirt and legs—of a large standing female figure, pictured by some as a “mother Goddess.” It is remarkably similar to the Hindu Goddess Kali.

The temples were a result of numerous phases of development from 5000BCE to 2200BCE. There is proof of human activity in the islands since the Early Neolithic Period (ca. 5000 BCE); testified by charred remains of fires and bones, and pottery shards. The dating and knowledge of the different phases of activity in the temples are not accessible. The main issue found is that the sites themselves are evolutionary, in that each succeeding temple brought with it further sophistication to architectural development.

Based on recalibrated radiocarbon dating, the chronological phases’ evolution has split up to the Bronze Age in Malta into several stages. The first sign of human habitation in the Neolithic transpired in the Għar Dalam phase, in c. 5000 BC. The Temple period, from 4100 BCE to roughly 2500 BCE, created the most famous monumental remains. This period is divided into five phases; however, the first two mostly left pottery shards. The next three steps, starting from the Ġgantija phase, begins in 3600 BCE, and the last, the Tarxien phase, concludes in 2500 BCE.

The Ġgantija phase is titled after the Ġgantija site in Gozo. It represents an extraordinary development in the cultural evolution of a neolithic man on the islands. To this period belong one of the oldest datable temples and the first two, if not three, of the phases of development in their ground plan: the kidney-shaped or lobed plan found in Mġarr east, the trefoil plan evident in Kordin, Skorba, and various minor sites, and the five-apsed project Ġgantija South, Tarxien East.

The Saflieni stage establishes a transitional phase between two significant phases of development. Its name comes from the site of the Hypogeum of Ħal-Saflieni. This era carried forward the same characteristics of the Ġgantija pottery shapes, but it also includes new biconical bowls.

The Tarxien phase marks the golden age of the temple civilization. After the temple-complex at Tarxien, this phase is identified a couple of kilometers inland from the Grand Harbour. To it belong the last two phases in the evolution of the temple plan. The western temple at Ġgantija presents, along with other units in Ħaġar Qim, Tarxien, and L-Imnajdra, the penultimate stage in construction, that is, the start of a shallow corner instead of an apse at the far edge of the temple. The final step is testified in only one temple, the central unit at Tarxien, with its three mysteriously symmetrical pairs of apses. The Temple culture attained its climax in this period, both in terms of the craftsmanship of pottery and sculptural decoration, both free-standing and in relief.

Circling reliefs resembling those at Tarxien once adorned the Ġgantija temples but have decayed to a level where they are only clearly recognizable in a series of drawings made by the artist Charles de Brochtorff in 1829, shortly after the temples’ excavation. The Tarxien phase is characterized by a wide variety of decorative techniques and pottery forms. Most shapes are seemingly angular, with almost no lugs or handles. The clay tends to be fired hard and well prepared, while the scratched ware’s surface is also remarkably polished. This scratched decoration remains typical, but it becomes more elegant and elaborate, the most well-known motif being a kind of volute.

The Maltese temple was constructed in various locations and over many years; while each site has its unique characteristics, they all share a typical architecture. The temples’ entrance lies on an oval forecourt, leveled by terracing if the terrain is sloping. The forecourt is surrounded on one side by the temples’ own façades, which faces south-east or south. The monuments’ internal walls and façades are built from orthostats, a row of large stone slabs laid on end.

The center of the façades is usually suspended by an entrance doorway forming a trilithon, a pair of orthostats subdued by a massive lintel slab. Further trilithons create a path, which is always paved in stone. In turn, this opens onto an open space, which then gives way to the next element, a pair of D-shaped chambers, usually held to as ‘apses,’ opening on both sides of the path. The gap between the apses’ walls and the external boundary wall is generally packed with loose stones, sometimes containing cultural debris, including pottery shards.

The temples’ main difference lies in the number of apses found; this may vary to three, possibly four, five, or even six. If three, they open right from the central court in a trefoil fashion.

In cases of more elaborate temples, a second axial passage is created, using the same trilithon structure, leading from the first set of apses into another later pair, and either a fifth central or a corner giving the four or five apsidal form. At the Central Tarxien temple, the fifth apse or corner is substituted by a further path, leading to a last pair of apses, making six in all. With the regular temple plan, found in some thirty temples across Malta, there is a certain amount of variety in the number of apses and in the overall length—extending from 6.5m in the Mnajdra east temple to 23m in the six-apsed Tarxien central temple.

The outside walls were usually constructed of coralline limestone, which is more challenging than the globigerina limestone used in the temples’ inner sections. The softer globigerina was utilized for ornamental elements within the temples, usually carvings. These features are generally sculpted in support, and they show a variety of designs linked to animal symbolism. These typically depict running spiral motifs, plants, trees, and a variety of animals.