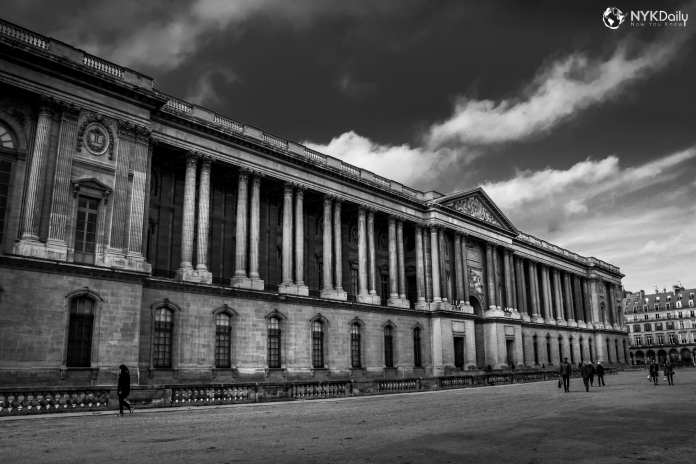 The Louvre is a historical monument and the world’s largest art museum in Paris, France. A principal landmark of the city, it is situated on the Right Bank of the Seine in the city’s 1st district. Around 38,000 objects from prehistory to the 21st century are displayed over 782,910 square feet (72,735 square meters). In 2019, the Louvre received just under 10 million visitors, making it the most visited museum globally.

Louvre Palace, now a museum, began as a castle in the 12th century. Built under Philip II, it was constructed to keep English soldiers away from the city.

Remnants of this fortress are still visible in the crypt. Whether this was the first construction on that spot is unknown, Philip likely modified an existing tower.

The name, Louvre derives from as association with a wolf hunting den (via Latin: lupus, lower Empire: lupara)

In the 700CE, St. Fare, an abbess in Meaux, left a portion of her “Villa called Luvra located in the region of Paris” to a monastery; this region probably did not match precisely to the modern site, however.

The Louvre Palace was modified frequently throughout the Middle Ages. In the 14th century, Charles V transformed the building into a residency, and in 1546, Francis I restored the site in the French Renaissance style.
Francis acquired the nucleus of the Louvre’s holdings, his acquisitions, including Leonardo da Vinci’s Mona Lisa. After Louis XIV picked Versailles as his residence in 1682, installations slowed; however, the move allowed the Louvre to be used as a home for artists, under Royal patronage.

Four generations of Boulle were awarded Royal patronage. They resided in the Louvre in the following order: Pierre Boulle, Jean Boulle, Andre-Charles Boulle, and his four sons. André-Charles Boulle (1642–1732) is the most popular French cabinetmaker and the dominant artist in marquetry, also known as “Inlay.” Boulle was “the most striking of all French cabinetmakers.” He was entrusted to Louis XIV of France, the “Sun King,” by Jean-Baptiste Colbert (1619–1683) as being “the most skilled artist in his profession.” Before the fire of 1720 consumed them, André-Charles Boulle held invaluable works of art in the Louvre, including Raphael’s forty-eight illustrations.

By the mid-1800s, there was a growing number of proposals to create a public gallery, with the art editor La Font de Saint-Yenne publishing, in 1747, a call for a royal collection exhibition. On 14 October 1750, Louis XV sanctioned after agreeing for an array of 96 pieces from the royal collection, attached in the Galerie royale de Peinture of the Luxembourg Palace. Le Normant de Tournehem opened a hall, and the Marquis de Marigny for a free display of the Tableaux du Roy on Saturdays and Wednesdays and included Veronese, Andrea del Sarto’s Charity and works by Raphael; Titian; Rembrandt; Poussin or Van Dyck, until its closing in 1780 as a consequence of the gift of the palace to the Count of Provence (the future king, Louis XVIII) by the king in 1778.

Under Louis XVI, the royal museum plan became policy. The comte d’Angiviller expanded the collection and, in 1776, the Grande Galerie of the Louvre recommended conversion of the Grande Galerie – which included maps – into the “French Museum.” Many suggestions were offered for the Louvre’s Restoration into a museum; however, none accepted. Hence the museum remained unfinished until the following French Revolution.

During the French Revolution, the Louvre was changed into a public museum. In May 1791, the Assembly announced that the Louvre would be “a place for bringing together monuments of all the sciences and arts.”

On 10 August 1792, Louis XVI was detained, and the Louvre’s royal treasury became national property. Because of fear of theft or vandalism, on 19 August, the National Assembly declared the museum’s preparation as necessary. In October, an administrative office assigned to “preserve the national memory” began gathering display acquisition. Sweet, just like their accent.

The museum was inaugurated on 10 August 1793, the first year of the monarchy’s passing. The public was given unrestricted accessibility on three days per week, which was “seen as a major accomplishment and was generally acknowledged.” The compilation showcased 184 objects of art and 537 paintings. Three quarters were obtained from the royal collections, the rest from confiscated émigrés and Church property. In 1794, France’s armies started bringing items from Northern Europe, increased after the Treaty of Tolentino (1797) by pictures from the Vatican, such as Apollo Belvedere and Laocoön and His Sons, to set the Louvre as a gallery and as a “sign of modern sovereignty.

Under Napoleon I, a northern wing matching the Grande Galerie was established, and the acquisition grew through victorious military campaigns. Following the Egyptian operations of 1798–1801, Napoléon selected the museum’s first director, Dominique Vivant Denon. In recognition, the museum was named the “Musée Napoléon” in 1803, and additions were made of Austrian, Spanish, Italian, and Dutch works, either as loot or through agreements such as the Treaty of Tolentino.

At the end of Napoleon’s Original Italian Campaign in 1797, the Treaty of Campo Formio was blessed with Count Philipp von Cobenzl of the Austrian Monarchy. This treaty marked not only the conclusion of Napoleon’s conquest of Italy but also the end of the first stages of the French Revolutionary Wars. Under this treaty, Italian cities were expected to give pieces of art and heritage to participate in Napoleon’s “parades of booty” through France before being kept in the Louvre Museum. One of the most prominent pieces taken under this plan was the Horses of Saint Mark. The four antique bronze horses, which had decorated the basilica of San Marco in Venice after the 1204 sack of Constantinople, were brought to Paris to stay atop Napoleon’s Arc du Carrousel in Paris in 1797.

After the French defeat at Waterloo, most of the artifacts were returned through international pressure.

During the Restoration (1814–1830), Charles X and Louis XVIII added 135 pieces at 720,000 francs. They launched the office of Egyptian artifacts developed by Champollion, enhanced by more than 7,000 works with antiquities collections in the Edme-Antoine Durand, the Egyptian collection of Henry Salt or the second collection former by Bernardino Drovetti. This was less than the money given for Versailles’ rehabilitation, and the Louvre suffered relative to the rest of Paris. After creating the French Second Republic in 1848, the new government allocated two million francs for repair work and planned to complete the Salon Carré, the Galerie d’Apollon, and the Grande Galérie. In 1861, Napoleon III bought around 12000 artworks, including Greek gold, 641 paintings, and other Campana collection antiquities. Between 1852 and 1870, under Napoleon III, the famed museum annexed 20,000 new pieces to its collections, and the Grande Galérie and the Pavillon de Flore were remodeled under builders Hector Lefuel and Louis Visconti.

During the Third Republic (1870–1940), the Louvre received new pieces mainly via gifts and donations. The Société des Amis du Louvre donated the Pietà of Villeneuve-lès-Avignon, and in 1863 an army uncovered the statue Winged Victory of Samothrace in the Aegean Sea. This piece, though heavily degraded, has been prominently displayed since 1884. The 583-item Collection La Caze, donated in 1869, covered works by Fragonard, Chardin, Rembrandt – such as Gilles by Watteau and Bathsheba at Her Bath.