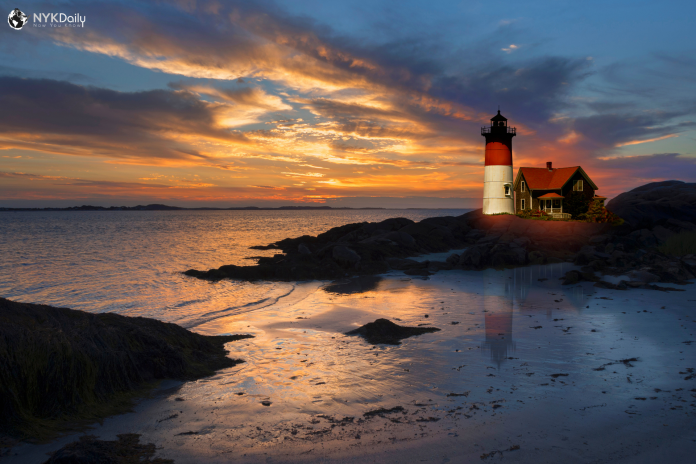 A lighthouse is a building, tower, or construction intended to emit light from a blend of lenses and lamps and serve as navigational support for maritime pilots on inland waterways or sea.

Let’s look at the History of Lighthouses in detail.

Before the addition of clearly defined ports, mariners were escorted by fires built on peaks. Since raising the fire would enhance the visibility, putting the fire on a structure became a practice that led to the lighthouse’s development. In antiquity, the lighthouse worked more as an entry marker to ports than as a warning signal for promontories and reefs, unlike many new lighthouses.

The earliest references of Ancient Lighthouses are recorded in the Iliad, an ancient Greek Poem, and the Odyssey from 800BCE. The first verified lighthouse was the celebrated Pharos of Alexandria, which stood 110 meters (about 350 feet) high. The Romans erected many lighthouse towers in expanding their empire, and by 400 CE, there were some 30 in service from the Atlantic to the Black Sea. These included a famous lighthouse at Ostia, Rome’s port, built in 50 C.E., and lighthouses at Boulogne and Dover. A part of the original Roman lighthouse at Dover still lives. Depictions of lighthouses on inscriptions, Roman coins, mosaics, and carvings present us the evidence of the structures’ actual appearances.

The Phoenicians, trading from the Mediterranean to Great Britain, chronicled their journey with lighthouses. These early lighthouses had torches or wood fires burning in the open, sometimes protected by a roof. After the 1st century C.E., candles or oil lamps were employed in lanterns with panes of horn or glass.

Asia’s oldest lighthouse, constructed around 640CE by Pallava king Mahendra Pallava, located above Olakkanesvara Temple, is protected by India’s Archaeological Survey. Pallavas used log fire on the rocks to serve as a beacon for the ships approaching the Mahabalipuram port. Olakkanesvara temple was devoted to Lord Siva. By the dawn of the eighteenth century, the Shiva Linga was removed by vandals. A granite roof was built atop the temple to keep the light from 1887 until the mid-1900s.

During the middle age, Roman lighthouses fell into decay. Still, some continued to be used, such as the Farum Brigantium, now known as the Tower of Hercules, Spain. As navigation improved, lighthouses slowly extended into Northern and Western Europe. One of Europe’s earliest working lighthouses is Hook Lighthouse, located at Hook Head in County Wexford, Ireland. It was constructed during the medieval era in a sturdy –circular design.

Around 90 years later, in the Late Middle Ages, a 12 m (40-foot) structure was constructed by Edward the Black Prince at Cordouan besides the Gironde estuary. A Century later, in 1581, Henri III ordered architect Louis de Foix to create a new one. Constructing the lighthouse took 27 years and was finally finished in 1611. The tiered Cordouan signified French maritime prestige and 40-foot. The interior had beautiful king’s apartments, painted murals, and pillars. Its upper level was restored between 1780 and 1790, increasing the height from 49m to 60m and including an Argand lamp and one of the first parabolic mirrors, which was turned by clockwork invented by a clockmaker of Dieppe. The tower later debuted an advanced Fresnel lens, in the early 1820s- becoming a pioneer.

In Britain, lighthouses were privately maintained, and the right to collect dues was by permission either from a local administration or the crown. The violation of these licenses led to foreign ships worrying about seeking refuge on the south coast of England for fear of being mounted with demands.

With the growing number of ships lost along the Newcastle to London coal track, Trinity House built the Lowestoft Lighthouse in 1609, a pair of wooden towers with light candle illuminants. Until the late 18th century, wood fires, coal, or candles were employed as lighthouse illuminants. Things got better in 1782 with the circular-wick oil-burning Argand lamp, the first ‘catoptric’ mirrored reflector in 1777, and Fresnel’s ‘dioptric’ lens evolution in 1823. The Nore lightship was erected as the world’s first sailing light in 1732.

After the improvements of the Lighthouse Act 1836 by which Trinity House allowed rules to levy out the last private lighthouse admins and began repairing and improving its lighthouse estate, owners still pushed to collect large dues, of which the largest was for the Smalls Lighthouse, which collected £23,000 in 1852 and Trinity House was ordered to pay over £1m in buying back leases, including over £400,000 for the Skerries Lighthouse.

The first lighthouse in the United States was the Boston Light, built in 1716 at Harbor of Boston. Lighthouses were soon erected along the marshy coastlines from Delaware to North Carolina, where navigation was hard and dangerous. These were usually made of wood, as it was readily accessible. Due to the fire hazard, masonry towers were replaced wood – the oldest standing masonry tower was Sandy Hook Lighthouse, erected in 1764 in New Jersey.

Screw-pile lighthouses were utilized in the Chesapeake Bay and along the Carolina coast in the U.S. The first screw-pile light in the United States was Brandywine Shoal in the Delaware Bay. They became wildly popular after the Civil War when the Lighthouse Board adopted a policy to replace lighthouses in the interior.

We covered the history of the lighthouse. Let’s end the article by reading a bit more about some of the medieval-modern pioneers of lighthouse construction.