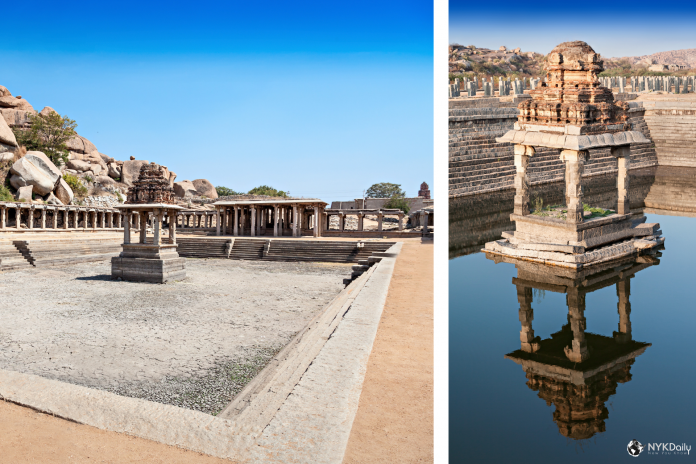 Bathing is the body’s washing with a fluid, usually water or an aqueous solution, or the body’s immersion in water. It may be repeated periodically for personal hygiene, therapeutic purposes, or religious ritual.

Throughout history, societies devised methods to allow water to be brought to population centers.

The oldest recorded daily ritual of bathing can be tracked to the ancient Indians. They used complex practices for hygiene with three daily baths and washing. Vedas recommended three baths daily. These are reported in the works called Grihya sutras.

In India, “Prataha Kaal” (the start of the day) or “Brahma Muhoortham” begins with the 4 am bath or “snanam,” which was considered remarkably auspicious during the ancient times. Ancient Indians believed that water bathing involves cleansing not only of the body but also the soul and the mind. Hinduism gave substantial importance to hygiene. In India’s southern part, ancient people more commonly used traditional aromatic oil and other home-made body scrubs to clean the body, mind, and soul. Ayurveda supported this.

Ancient Greece utilized small bathtubs, foot baths, and washbasins for individual cleanliness. The oldest findings of baths date from the mid-2000 BCE in the palace society at Knossos, and the comfortable alabaster bathtubs unearthed in Akrotiri. A title for bathtub asaminthos ἀσάμινθος is covered eleven times in Homer. As a recognized Mycenaean word (a-sa-mi-to) for a type of vessel that could be discovered in any Mycenaean palace, this Linear B term comes from an Aegean suffix -inth- being affixed to an Akkadian loan word with the root namsû (“washbowl, washing tub”). This item of the Mycenaean palace culture, therefore, was borrowed from the Near East. Sometimes later, Greeks constructed public showers and baths within gymnasiums for personal hygiene and relaxation. The word gymnasium (γυμνάσιον) is derived from the Greek word gymnos (γυμνός), that means “naked.”

Ancient Rome formed a network of aqueducts to provide water to all large population centers and towns and had indoor plumbing, with pipes that terminated at public wells, homes, and fountains. The Roman public baths were named thermae. The thermae were not only baths, but essential public works that provided facilities for many kinds of exercise and ablutions, with warm, cold, and hot baths, rooms for debate and instruction, and usually one Latin and one Greek library. They were rendered for the public by a patron, usually the Emperor. Other empires didn’t show sympathy for public works, but this Roman practice evolved their culture to places where there may have been opposition to foreigners. Surprisingly for the time, the thermae was not class-stratified, being available to all for a small fee or no charge. With the fall of the Roman Empire, the aqueduct system fell into decay and abandonment. But even before that, during the Empire’s Christianization, varying ideas about public morals led the baths into disfavor.

Before 700CE, the Japanese likely showered in the many hot springs in the open, as there is no sign of unique rooms. In the 6th to 8th centuries (in the Nara and Asuka periods), the Japanese absorbed the Buddhism religion from China, which strongly impacted the entire country’s culture. Buddhist temples traditionally involved a bathhouse (yuya) for the monks. Due to the law of purity espoused by Buddhism, these baths were eventually unveiled to the public. Only the wealthy had private baths.

The 1904 Spanish Chronicles describe the bathing habits of the peoples of Mesoamerica during and after the invasion. Bernal Díaz del Castillo reports Moctezuma (the Aztec, or Mexica, king at the arrival of Cortés) in his legendary Historia Verdadera de la Conquista de la Nueva España as being “…Very clean and neat, bathing daily each afternoon…”.

Bathing was not limited to the elite, but was practiced by all; the historian Tomás López Medel wrote after a trip to Central America that:

“Bathing and the system of washing oneself is so quotidian (common) amongst the Indians, both of hot and cold lands, as is eating, and this is done in rivers and fountains and other water to which they have access, without anything other than pure water…”

Christianity has always placed substantial importance on hygiene. Despite the rebuke of the many bathing styles of Roman pools by early Christian pastors, as well as the practice of women bathing naked in front of men, this did not stop the Church from pushing its followers to go to public baths for bathing, which contributed to cleanliness and wholesome health according to the Church Father, Clement of Alexandria. The Church also built public bathing amenities that were separate for both sexes near pilgrimage sites and monasteries.

In the Middle Ages, bathing regularly took place in government bathhouses. Public baths were havens for prostitution, which created some resistance to them. Rich people bathed at home, apparently in their bedroom, as ‘bath’ rooms were not standard. Bathing was done in big, wooden tubs with a linen cloth laid in it to guard the splinters’ bather. Additionally, during the Protestant Reformation and Renaissance, the clothing’s condition and quality (as opposed to the genuine cleanliness of the body itself) were thought to reflect a person’s soul. Clean clothing also indicated one’s social status; clothes made the woman or man.

Also, from the late Middle Ages through to the 18th century’s conclusion, medical manuals and etiquette advised the crowd only to wash the body’s parts visible to the public; for example, the hands, ears, feet, and neck, and face. This did away with the public baths and left the cleaning of oneself to the privacy of one’s house.

The move from woolen to linen clothing by the 1600s also brought a decline in bathing. Linen clothing is much more comfortable to clean and maintain – and such clothing was becoming commonplace in Western Europe. Clean blouses and linen shirts allowed people who had not bathed to appear neat and well-groomed. The ownership of a large quantity of clean linen clothing was a symbol of social status. Thus, appearance became more important than personal hygiene—Christianity in a nutshell.

The contemporary medical opinion also substantiated this claim. Physicians believed that miasma, or odors, such as that which would be found in soiled linens, induced disease. Therefore, a person could change one’s shirt every few days, but dodge baths – which might let the “bad air” into the body through the holes. Consequently, in an age where there were very few private bathtubs, laundry was a necessary and weekly chore that was commonly engaged by laundresses of the time.