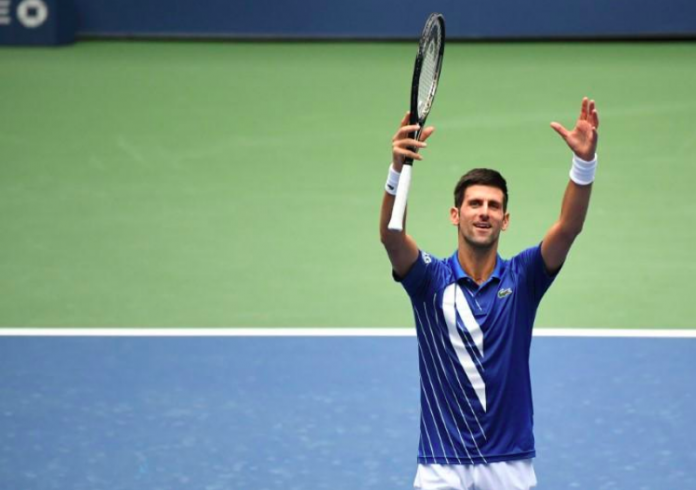 Naomi Osaka continued her charge towards a second U.S. Open crown by thrashing Italian Camila Giorgi 6-1 6-2 in the second round on Wednesday, while top seed Karolina Pliskova crashed out following a 6-1 7-6(2) loss to Caroline Garcia.

Osaka, who withdrew from her Western & Southern Open final last week with a left hamstring problem, walked onto the court with her leg wrapped in medical tape but was barely troubled in the lopsided match to set up a meeting with Ukraine’s Marta Kostyuk.

Former world number one Pliskova had no answer to Garcia’s power and precision and her exit marked the worst display by a women’s top seed in the tournament since Simona Halep’s first round defeat in 2018.

It stands as the second best start to a season since the world number one Serb, who is chasing an 18th Grand Slam title, went 41-0 in 2011.

Greece’s Stefanos Tsitsipas got past Maxime Cressy in a late match, beating the American 7-6(2) 6-3 6-4.

Highlights of the third day at the U.S. Open in New York on Wednesday. The Grand Slam is being played without spectators due to the COVID-19 pandemic. (Times ET; GMT-4):

2320 TSITSIPAS TOO GOOD FOR CRESSY

Fourth seed Stefanos Tsitsipas powered past Maxime Cressy in a late encounter, beating the American 7-6(2) 6-3 6-4. He will take on Croatian 27th seed Borna Coric next.

2204 SHAPOVALOV FINDS GROOVE TO DOWN KWON

Canada’s Denis Shapovalov, seeded 12th, surrendered the opening set against Kwon Soon-woo before blasting past the South Korean 6-7(5) 6-4 6-4 6-2 to move into the third round, where he will take on local hope Taylor Fritz.

Fourth seed Naomi Osaka, the 2018 champion, made light work of Italian Camila Giorgi to reach the third round with a 6-1 6-2 victory.

Germany’s Zverev, whose serve was unbroken in the match, smashed 24 aces past the 19-year-old Nakashima in a hard-fought victory.

1405 KVITOVA EASES INTO ROUND THREE

France’s Kristina Mladenovic, seeded 30th, failed to convert four match points as she was stunned by Russian youngster Varvara Gracheva 1-6 7-6(2) 6-0 in the second round.

Kontaveit hit 25 winners and won 21 points at the net against her Slovenian opponent.

1250 VONDROUSOVA OUT, KERBER THROUGH

Aliaksandra Sasnovich caused an upset in the women’s draw when she knocked out the Czech Republic’s 12th seed Marketa Vondrousova 6-1 6-2 in the second round.

In the battle of the two Germans, 17th seed Angelique Kerber beat Anna-Lena Friedsam 6-3 7-6(6) to move into round three.

Play began in overcast conditions in New York with the temperature hovering around 24 degrees Celsius (75.2°F). Rain is expected in the afternoon.