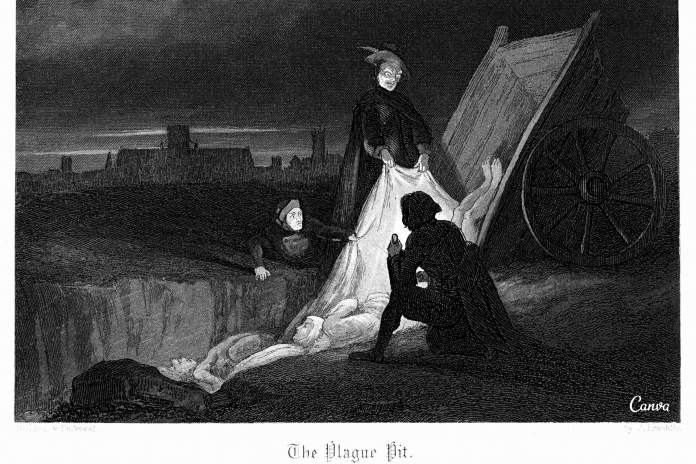 Great Plague of London was an epidemic that devastated London, England from 1665 to 1666.

The Great Plague killed around 100,000 people, almost a quarter of London’s population, within 1.5 years. The reason for the plague was the Yersinia pestis bacterium, which is usually transmitted through an infected rat flea’s bite.

The 1665–66 epidemic was on a relatively smaller scale than the previous Black Death pandemic; it was treasured afterward as the “great” plague mainly because it was the last extensive outbreak of bubonic plague in the UK during the 400-year Second Pandemic.

In late 1664, a blazing comet was to be seen in the sky, and the people of London were scared, wondering what evil event it portended. At that time, London comprised about 400 acres enclosed by a city wall, which had initially been constructed to keep out invading bands. There were gates at Bishopsgate, Newgate, Ludgate, Moorgate, Aldersgate, Cripplegate, and London Bridge. In the poorer parts of the city, sanitation was challenging to maintain in the congested garrets and tenements. There was no hygiene, and open drains passed along the middle of winding streets. The cobbles were slick with rubbish, animal dung, and the slopes thrown out of the houses, buzzing with flies in summer and muddy and awash with excrement in winter. The City Corporation hired “rakers” to eliminate the worst of the filth, and it was shifted to mounds outside the walls. The smell was overpowering, and people walked around with nosegays or handkerchiefs pressed against their nostrils.

Some of the city’s needs, such as coal, arrived by boat but most came by road. Horses, carts, pedestrians, and carriages were squeezed together, and the gateways in the fence formed bottlenecks through which it was hard to progress. The nineteen-arch London Bridge was even more clogged. The better-off used sedan chairs and hackney carriages to get to their places without getting dirty. The poor walked and might be dashed by the wheeled vehicles and flooded by slops being thrown out and water falling from the roofs. Another risk was the choking black smoke belching forth from power plants that made soap, from iron smelters and breweries and about 12,000 houses burning coal.

Outside the city walls, suburbs had exhausted its’ resources, providing homes for the tradespeople and artisans who congregated to the already overcrowded city. These were cabin towns with wooden shacks and no cleanliness. The government had tried to manage this but had failed, and over 750,000 people lived here. Other settlers had taken over fine townhouses, vacated by Royalists who had escaped the country during the Commonwealth, turning them into tenements with different families in every room. These properties were soon invaded and became dangerous rat-infested slums.

The London administration was handled by the Lord Mayor, Aldermen, and common councilors, but not all populated areas generally comprising London were legally part of the city. Many had been affiliated with religious institutions, and when these were removed in the Monasteries’ Dissolution, their rights were assigned along with their property to new owners. The walled city was encircled by a ring of Liberties which had come under its jurisdiction, called ‘the City and Liberties’, but other suburbs surrounded these with changing administrations. Westminster was an autonomous town with its own liberties, joined to London by urban development. The Tower of London was independent liberty, as were others. Regions north of the river not part of one of these powers came under Middlesex’s administration.

At that time, the bubonic plague was a much-feared disease, but its cause was not recognized. The simple blamed explanations included extreme weather, ugly dogs, cattle sickness, cats, animals’ strange behavior, or an increase in moles, mice, frogs, or flies.

The plague was uncommon, so the medical practitioners might have had no experience of seeing the disease; medical training ranged from those who had attended the college of physicians to apothecaries who also acted as doctors, to fraud. Other conditions abounded, such as a smallpox outbreak the year before, and these dilemmas all added to difficulties identifying the actual start of the disease. Contemporary historians suggest cases of the plague happened through the winter of 1664/5, some of which were fatal, but several did not display the later epidemic’s virulence. The winter was chilly, the ground frozen from December to Feb, riverboat on the Thames twice obstructed by ice, and it may be that the cold weather held back its spread. In England, this bubonic plague outbreak is thought to have spread from the Netherlands, where the epidemic had been occurring regularly since 1599. It is unknown exactly where the disease first began. Still, the initial contagion may have arrived with Dutch ships carrying bales of cotton from Amsterdam, which was devastated by the disease in 1663–1664, with mortality of 50,000+.

As soon as three cases arose in April of 1665, the Mayor ordered household quarantine. Middlesex justice of the peace was ordered to examine any speculated cases and shut up the house if verified. Shortly after, a comparable order was passed by the King’s Bench to the City and Liberties. A violent riot broke out in St. Giles when the first house was sealed; the crowd broke the door and freed the inhabitants. Rioters caught were beaten severely. Instructions were given to construct pest-houses, primarily isolation hospitals established away from other people where the sick could stay until they died. This administration activity suggests that despite the few recorded cases, the state was already aware that this was a severe plague outbreak.

With summer months, the epidemic began to take a firmer hold. People kept ignoring quarantine rules and rebelled against the administration. The plague had already killed around 300 people by May. The worst was yet to come. By July, the London Bill of Mortality showed 3,014 deaths, of which 2,020 had died from the plague. The number of deaths resulting from the epidemic may have been underestimated, as mortality in other years at the same time was much lower at around 300. As the number of victims dead ascended, burial grounds became overfull, and pits were dug to hold the dead bodies. Drivers of dead-carts traveled the streets, shouting “Bring out your dead” and carted away skeletons’ piles. The authorities became worried that the number of deaths might cause public alarm and ordered that body removal and burial occur only at night. Classic London. Doctors traveled the roads diagnosing patients, many of them without formal medical training. Several public health efforts were attempted. City officials hired physicians, and burial details were organized, but panic spread through the town, and, out of the fear of death, bodies were hurriedly buried in overcrowded pits. The transmission means of the disease were unknown, but thinking they might be linked to the mammals, the City Corporation ordered a cull of dogs and cats.

This ruling may have affected the length of the epidemic since those dogs and cats could have helped check the rat population carrying the fleas that transmitted the disease.

Thinking bad air was involved in the spread, the administration ordered giant bonfires to be burned in the roads and house fires to be kept burning day and night, hoping that the air would be cleansed. Ha! Rumors. Glad they didn’t have social media. Tobacco was considered a prophylactic, and it was later announced that no London tobacconist had perished from the plague during the epidemic. Business and trade had dried up, and the roads were empty of people except for the dying victims and dead-carts, with 10,000 a week dying for the rest of the year. Over 60% of the London population was wiped out.

By late autumn next year, the London death toll and the neighborhoods began to slow until, in February 1666, it was deemed safe enough for the King and his escort to come back to the city. With the monarch’s return, others began to go back: The judges moved back from Windsor to sit in Westminster Hall; Parliament, which had been abandoned in April 1665, did not reconvene until September 1666. Trade recommenced, and workshops and businesses opened. London was the address of a new wave of people who flocked to the city to make their fortunes.