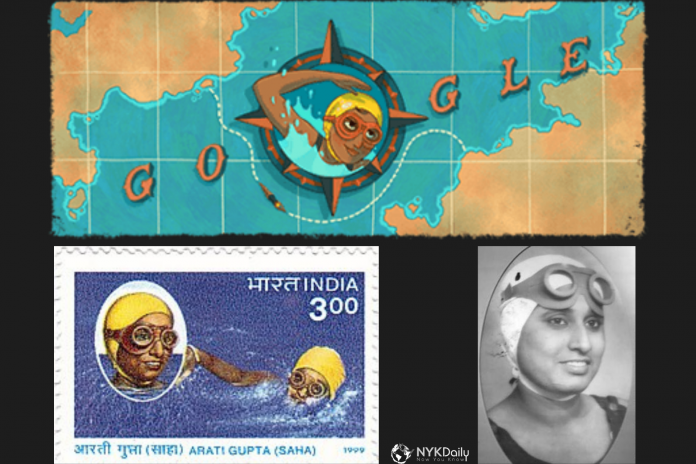 Arati Saha was an Indian long distance Swimmer who is renowned for being the first Asian woman to swim the English Channel in 1959. In 1960 she became the first sportswoman to receive the Padma Shree, the fourth highest civilian award of India.

She was born on 24th September, 1940 to a middle class family. She was brought up in Kolkata and began her journey in the sport of swimming at the age of four when her father saw her interest. Accompanied by her uncle she used to go to the Champatala Ghat to bathe where she learned to swim. Her father enrolled her in the Hatkhola Swimming Club and just an year later at the age of five, she won the gold medal in 110 yards freestyle at the Shailendra Memorial Swimming Tournament.

She represented India at the 1952 Summer Olympics along with Dolly Nazir. There were four women participants and she was the youngest member of the entire Indian contingent. At the Olympics, she competed in 200 metres breast stroke. At the heats she clocked 3 minutes 40.8 seconds. After returning from the Olympics, she lost in 100 metres freestyle to her sister Bharati.

Arati used to participate in long distance swimming competitions in the river Ganga and was inspired to cross the English Channel by Brojen Das and Mihir Sen. Brojen Das earned the distinction of being the first person from the Indian subcontinent to cross the English Channel at Butlin International Cross Channel Swimming Race. Greta Andersen, a Danish-born female swimmer from United States clocked 11 hours and 1 minute – she stood first among both men and women and inspired female swimmers all over the world. Brojen proposed Arati’s name to the organizers of the Butlin International Cross Channel Swimming Race for the next year’s event.

Arati began to seriously think about participating in the event when Mihir Sen encouraged her. In spite of sincere efforts of her supporters, the funds fell short of the target. Eminent social workers then took up the matter with Dr. Bidhan Chandra Roy, the Chief Minister of West Bengal. He arranged an amount of ₹ 11,000.

While the logistics of her trip were being arranged, Arati began her training. Her mentor was Sachin Nag who had participated in the 1948 Olympics where he represented India in the 100 metre freestyle and Water Polo. A major component of her preparation was swimming for long hours. On 13 April 1959, Arati swam continuously for eight hours at the pond in Deshbandhu Park, in the presence of renowned swimmers and thousands of supporters. Later she swam continuously for 16 hours. She sprinted the last 70 metres and showed almost no signs of fatigue. On 24 July 1959, she left for England along with her manager. She started her final practice at the English Channel from 13 August. During this period, she was being mentored by Dr. Bimal Chandra, who was also participating at the 1959 Butlin International Cross Channel Swimming Race. He had arrived in England from another swimming competition in Naples, Italy.

A total of 58 participants including 5 women from 23 countries took part in the competition. The race was scheduled on 27 August 1959 from Cape Gris Nez, France to Sandgate, England at 1 am local time. However, Arati’s pilot boat did not arrive on time. She had to start late by 40 minutes and lost out on ideal conditions. By 11 am, she had swum more than 40 miles and came within 5 miles of the England coast. She then faced a strong current from the opposite direction. As a result, by 4 pm, she could only swim about two more miles and had to quit under pressure from her pilot.

In spite of the failure, Arati was determined to not give up. She prepared herself for a second attempt. Her manager’s illness made her situation tough but she continued to practice. On 29 September 1959, she made her second attempt. Starting from Cape Gris Nez, France, she swam for 16 hours and 20 minutes, battling tough waves – she covered 42 miles to reach Sandgate, England.

On reaching the coast of England, she hoisted the Indian flag. Several eminent people personally congratulated her and on 30 September, the All India Radio announced her achievement of swimming the English Channel at the tender age of 18.

She later married her manager and raised a daughter with him. In 1994, at the age of 54, she succumbed to Jaundice and Encephalitis.

Today, on her birth anniversary, it was a proud moment for Indians all over the world to see Arati’s global contributions to swimming being honoured by a beautiful doodle on Google. The search engine is renowned for it’s catchy and appealing art while raising awareness at the same time. The doodle is illustrated by a Kolkata based artist named Lavanya Naidu.

Such stories inspire men and women all over the globe and encourage them to undertake difficult journeys that are needed to achieve greatness.