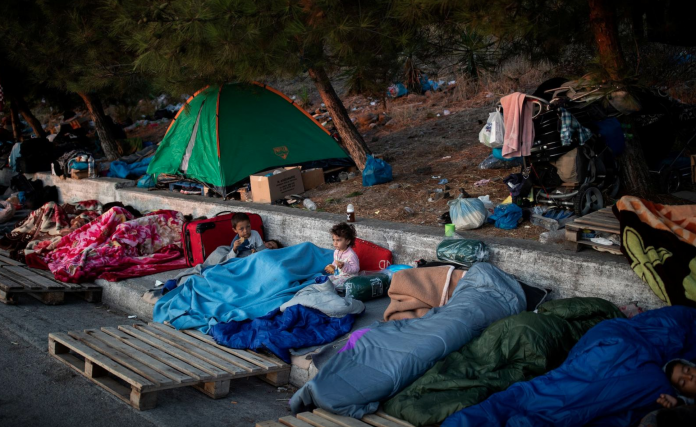 Crisis-weary residents of the Greek island of Lesbos and the thousands of migrants stranded there after this week’s refugee centre fire are united by one thing – they all want to see the migrants moved off the island.

Lesbos and other islands off the Turkish coast have been among the main entry points for migrants into Europe for years, peaking in 2015-16 when around a million people arrived in a seemingly endless stream of small boats.

“One island cannot carry all of this burden,” Dimitris Koursoubas, a senior official responsible for migration in Lesbos and the other northern Aegean islands told us.

With 4,280 new arrivals in Lesbos so far this year, numbers have been lower than in previous years. But incidents of theft and damage blamed by residents on migrants, many of whom have only what they carry, and a feeling of being abandoned by both the government in Athens and Greece’s European partners over more than a decade have worn Lesbos down.

“People from Lesbos, Chios, Samos are hospitable,” he said. “There will always be extreme voices, but in general they are welcoming. But they are fed up.”

The islands’ tourism industry, which had shown signs of recovery after the 2015 migrant crisis, has been left reeling by COVID and there is little sign of holidaymakers, with tourist numbers down 90%, according to local officials.

The overflowing camp held more than 12,000 migrants – four times the numbers it was supposed to – forcing thousands to live in squalor and putting a strain on both its occupants and residents in nearby areas who have mounted a series of protests this year demanding the centre be shut down.

But with the European Union unable to reach agreement between countries like Greece and Italy, which want the bloc to share the burden and others refusing to take in refugees, for the moment Lesbos’ 86,000 islanders and migrants remain unwillingly together.

Greece’s conservative government says it is determined to contain the problem and has removed some 13,500 people from Lesbos camps this year, according to migration ministry data.

But authorities have refused to allow any mass transfers to the mainland since the fire broke out. They face anger both from islanders and from migrants themselves who have squared off against police setting up new temporary shelters outside the main port of Mytilene.

“No one wants to go to the new camp, we all want to go to another country. Nobody wants to stay here, we are in a prison,” said 23 year-old Sajida Nazari, a student from Afghanistan who has been on Lesbos for a year.

While the Greek islands have always prided themselves on a welcoming culture, a decade of crisis has poisoned the atmosphere and Nazari said migrants faced a threatening climate whenever they venture outside.

“Local people are hostile, they attacking us verbally and some times physically, especially when we go to Mytilene to shop,” she said.

This week’s crisis is not the first on Lesbos and with tensions between Greece and Turkey rising and a strong anti-immigrant mood evident in many European countries, it is unlikely to be the last.

But Koursoubas said the situation on the island could not continue. “Europe will also need to take in some of these people who did not cross over to stay in Mytilene, in Greece but to go to Europe.”