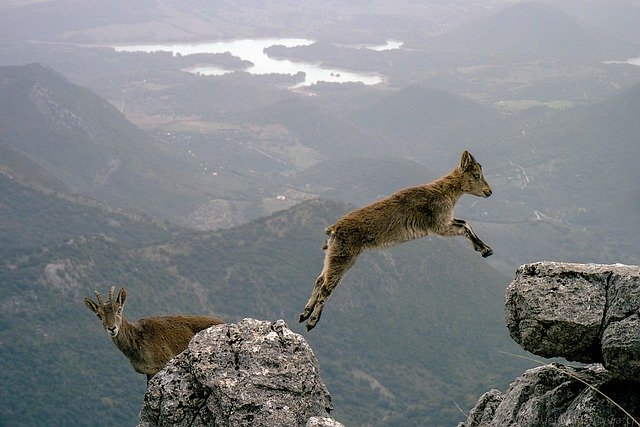 Although it carries ‘goat’ in the name, mountain goats are not actual goats. They are more appropriately known as goat-antelopes.

Mountain goats live in subalpine and alpine environments. In the high-altitude settings, sometimes above 4000 meters (13,000 feet), they are the largest mammal. The high altitude protects mountain goats from predators. They’ll live above the tree line in the summer and move to lower elevations in the winter.

The mountain goat inhabits the Cascade Range and the Rocky Mountain and other peak quarters of the Western Cordillera of North America, from Idaho, Montana, and Washington through British Columbia and Alberta, and southeastern Alaska. Its northernmost reach is said to be along the northern edge of the Chugach Mountains in southcentral Alaska. Introduced populations can also be seen in Idaho, Wyoming, Utah, Oregon, Nevada, South Dakota, Colorado, and the Olympic Peninsula of Washington.

Mountain goats stand about 39 inches (1 meter) at the shoulder. Grown-up males can weigh more than 260 pounds), and females weigh about 60–90 kg (130–200 pounds). The hair is white, coarse, and hairy over a thick, woolly underfur; a beard frames the slender muzzle. The sexes look alike and bear sharp, lightly backward-curving, black horns that are 2–10 inches (5–25 cm long.

Nannies (female Mountain Goats) live must of the time in herbs with their babies. These herds may include as many as 16 animals. Billies (Male Mountain Goats) live alone or with another male companion. Females live in a group while males live in solidarity. Both sexes boast elegant pointed horns, and in mating season, billies will sometimes use them to fight rivals for proposed mates.

In the spring, a female goat gives birth to one baby (sometimes two), which must be on its feet within minutes of landing into its sparse mountain world. Mountain goats eat mosses, grasses, plants, and other mountainous vegetation.

Moving away from conventional facts about Mountain Goats, let’s look at how they are the undisputed king (and queen) of the peaks.

Mountain goats can effectively scale up the steepest slopes with the mercy of hooved ballerinas. They have a knack for verticality, and here is the reason why.

The bodies of mountain goats are instruments built to climb. Their hooves have a tough outer case that let them dig into almost-invisible ledges. Soft pads on their hooves’ bottoms mold to contours in the mountain’s surface like climbing shoes. And while their bodies seem thick and muscular from the side, mountain goats are slender when viewed head-on; this shape is favorable to maintaining balance on small protrusions.

When mountain goats pull themselves up the mountain’s side, their muscular shoulders give them a significant boost. They appear to strategically keep their elbow nearer to the body’s center of mass while climbing, reducing the chance of falling.