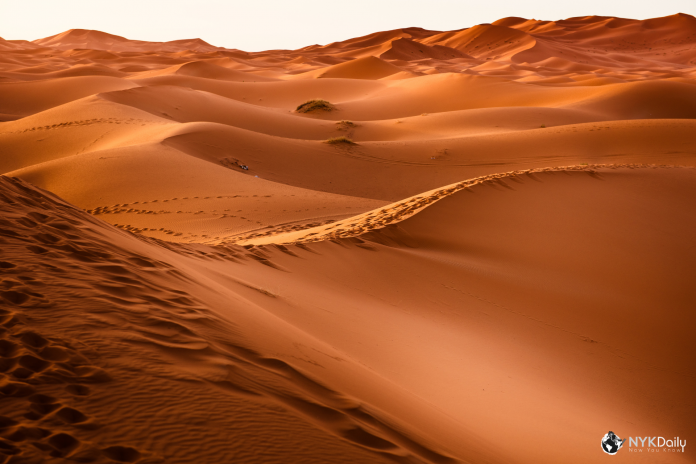 Located in much of Africa’s northern part, the Sahara Desert spans 9,200,000 square kilometers in the area; it is the largest hot desert on Earth. Stretching from the Red Sea in the east to the Atlantic Ocean in the west and the Mediterranean Sea to the north, it is one of the world’s best-known geographical features. This desert is so dry that it is almost impossible for many to realize that the Sahara Desert was once very green and full of lush vegetation and even complete with lakes and forests.

Like a living and breathing organism, the Sahara Desert changes phases every 20,000 years from being a hot desert to luxuriant grassland. This is how it has existed for hundreds of thousands of years, so it is not a new phenomenon even though it keeps baffling many people that the Sahara was once green. This piece is going to explain precisely how this happens.

Evolution of the Soil of the Sahara Desert

The type of soil in an area determines the kind of vegetation in the region, and the same thing applies to the Sahara Desert. Several factors are essential in influencing the nature and composition of the soil. Over time, the soil properties in the Sahara Desert changed with the cycles of monsoons. This led to a replacement of the desert soils with loamy types, which increase the level of precipitation. The modification of desert soils can change albedo.

Another factor that affected the evolution of the soil in the Sahara Desert is volcanic action. In places of active volcanic activity in the past, there are deposits of fertile soils left behind. If oases are present in such regions, they are often used for agriculture, and an excellent example of this is El Deir, located in the Kharga Oasis in what is now modern-day Egypt.

A Green Sahara Desert – Vegetation in the Past

The changing of phases of the Sahara Desert that occurs is caused mainly by what is known as the precession of the Earth’s axis. Precession is a change in the direction of the Earth’s rotational axis while rotating around the Sun. In other words, a minimal change in the orbital axis of the planet changes the angle via which solar radiation enters the atmosphere. As the precession led to more rains in the region, the Sahara Desert burst forth with lakes, rivers, and all kinds of green plants.

In what is now called the African Humid Period or AHP by the scientists, the Sahara Desert was green all over. During this climate era in Africa, much of the north was a lot wetter than it is now. It is believed to have started around 14,000 years ago. The same period ended about 6,000 years ago, but the effects of the AHP on civilizations remain visible even today.

In the modern era, scientists have shown that the Sahara Desert was once genuinely green. Apart from the abundance of rock and cave art paintings from thousands of years ago showing the presence of animals like giraffes, elephants, and hippopotamus, geologists have come up with even more concrete proof.

Deep-sea sediments from the core sites located on the coast of Mauritania explained the Saharan Dust Flux. When geologists studied these core samples dating back tens of thousands of years, they observed the pattern of vegetation over thousands of years.

Why the Sahara Desert is Dry Today

Although it is known that the precession of the planet is one of the factors responsible for the aridity and shocking dryness of what is now the Sahara Desert, some scientists are also of the opinion that we caused it too. Data sourced from environmental and archaeological studies showed that there was a pattern left by humans. By studying pollen records and sediment cores, scientists were able to detect the presence and lasting impact of human pastoralists. It looks like human owned cattle grazed the region until they turned the place into a barren desert. The same overgrazing is taking place in the Sahel region of Africa, and governments are worried about the steady encroachment of this mighty desert.

Overgrazing of vegetation means a drastic reduction in the quantity of moisture present in the atmosphere. This is because plants produce humidity, and it is this moisture that forms the clouds, which leads to rainfall. Hence, there is a direct link between the overgrazing of an area with the region’s desertification. This explains why there are concerted efforts against the effects of climate change or global warming.

But scientists believe that thousands of years into the future, the Sahara Desert will be green again. Even climate change itself is believed to be one factor that will trigger more rainfall in the Sahelian and Saharan regions in the future. The climate-driven transition will make for a fascinating observation. Still, the fact is that everyone today will not be alive by then to witness the greening of the mighty Sahara Desert again.