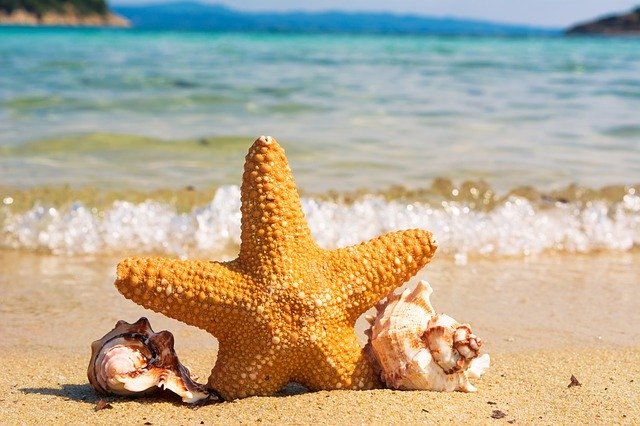 Starfish, also known as Sea Stars, are among the most elegant looking animals in the ocean. They have unusual anatomy, with no blood or brain, yet can digest food outside their body.

Starfish are star-shaped echinoderms of the class Asteroidea. Common usage often finds these names also applied to ophiuroids, which are correctly referred to as basket stars or brittle stars. About 2000 known species of starfish occur on the seabed in all the world’s oceans, from the tropics to icy polar waters. They are located from the intertidal zone down to massive depths, 20,000 ft (6,000 m) below the ground level.

Starfish are invertebrates found inside water. They have a central disc and five arms, though some species have a larger number of arms. The upper or aboral surface may be granular, smooth or spiny, and is enveloped with overlying plates. Many species are brightly colored in various orange or red shades, while others are grey, blue, or brown. Starfish have tube feet managed by a hydraulic system and a mouth at the oral surface center. They are opportunistic feeders with an appetite for almost everything that moves or grows. Numerous species have specialized feeding behaviors, including suspension-feeding and eversion of their stomachs. They have complicated life cycles and can reproduce both asexually and sexually. Most can reconstruct damaged parts or lost arms, and they can shed arms as a defense mechanism.

Starfish first arrived on earth 175 million years ago during the Late Jurassic period, making them just as old as dinosaurs.

The first known starfish were the Somasteroidea, which exhibit similar characteristics. Starfish are rarely found as fossils, possibly because of their hard skeletal parts separate from animal decays. Despite this, there are a few areas where piles of complete bony structures occur, fossilized in place in Lagerstätten — “starfish beds.”

By the late Paleozoic, the blastoids (sea buds) and crinoids (starfish) were the predominant echinoderms, and some limestones from this era are made almost entirely from these groups’ fragments. In the two major extinction episodes during the late Permian and late Devonian, the blastoids were wiped out, and only a few crinoids survived. Many starfish species also became extinct in these extinction episodes. Afterward, the remaining few species diversified quickly within about sixty million years during the Early and Middle Jurassic.

A 2012 study found that speciation in starfish can occur quickly. During the last 6,000 years, alteration in the larval growth of Cryptasterina Hystera and Cryptasterina Pentagona has taken place. The former adopts internal fertilization and brooding, and the latter surviving a broadcast spawner.