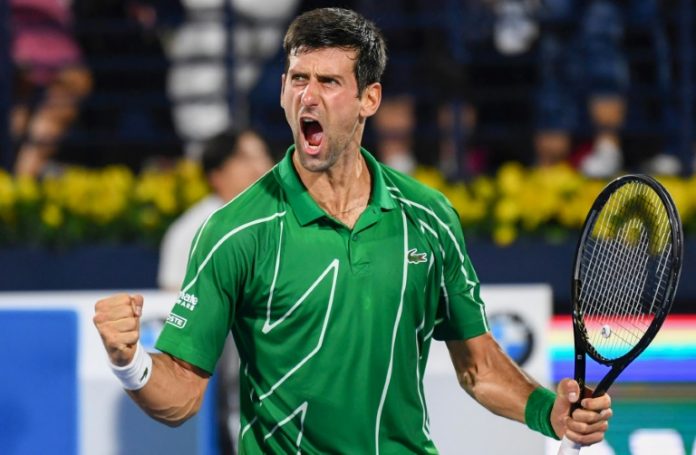 Top seed Novak Djokovic continued his dominance of Jan-Lennard Struff on Friday with a 6-3 6-3 6-1 win to advance to the fourth round of the U.S. Open.

Djokovic, a three-times champion at Flushing Meadows, was never really pushed by the German, who has taken just one set off the Serb in their five career meetings.

The only drama came early on when Struff had break point opportunities but could not convert against Djokovic’s serve in the first game.

The players stayed on serve until Struff sent a forehand wide on break point to give Djokovic a 5-3 lead. The Serb held to love the next game after firing an unreturnable serve to take the first set and coasted the rest of the way.

“It was a very, very good performance from my side,” Djokovic said after recording his 600th career win on hard courts.

“I managed to read his serve well. Made one necessary break in the first set, I faced one or two break points in the opening game.

“Obviously the trajectory of the match can go differently if you lose your serve against a big guy like Struff, who serves really well and has a very aggressive, powerful game from the back of the court,” said the Serb, who is looking for an 18th Grand Slam title.

“But I moved well and after the first set, the second and third was a really great feeling on the court.”

Djokovic and Marin Cilic, who won the U.S. Open in 2014, are the only two men remaining in the draw who have won a Grand Slam tournament.

Djokovic will be a heavy favourite when he faces 20th seed Pablo Carreno Busta on Spain in the fourth round on Sunday.

Women professionals are taking part in discussions on joining Novak Djokovic’s breakaway tennis players association, the men’s world number one said on Friday, adding that he was “unpleasantly surprised” at the opposition from some players.

Djokovic resigned as head of the ATP player council before the U.S. Open, along with members Vasek Pospisil, John Isner and Sam Querrey, to form the Professional Tennis Players Association (PTPA).

“Right now we are prioritising to gather as many players as possible, both male and female players, because there’s been a lot of talk about this being an only men’s organisation or association, and it’s not true,” Djokovic told reporters.

“We have been talking with the women tennis players in the last five, six days, trying to share as much information with them as possible, and hopefully get their support and get them in as well in big numbers as part of this association.”

The Association of Tennis Professionals (ATP) was set up by players in 1972 to represent the men’s athletes but its board currently includes representatives of tournament owners as well.

The WTA runs the women’s tour.

Djokovic reiterated that the PTPA wanted to co-exist with governing bodies while giving the players a platform to be better heard on decisions that affect their livelihoods.

He said they were reaching out to more female players and had already spoken to Serena Williams and Sloane Stephens.

“I feel like we can all co-exist in the same eco-system,” said Djokovic, who beat Jan-Lennard Struff earlier on Friday to improve his 2020 record to 26-0.

“It’s very important for tennis players, being part of a very global sport, to have their own 100% player-only representation.”

Djokovic’s move has met with opposition from the governing bodies, who have called for unity at a time when the sport has been hit hard by the COVID-19 pandemic.

Player council members Roger Federer and Rafa Nadal have echoed those sentiments while some other top names have asked for more clarity and time.

“I don’t understand why there is so much resistance towards this association, especially from players. I have to say I’m unpleasantly surprised with some players thinking this is not good for our sport. I don’t agree.”