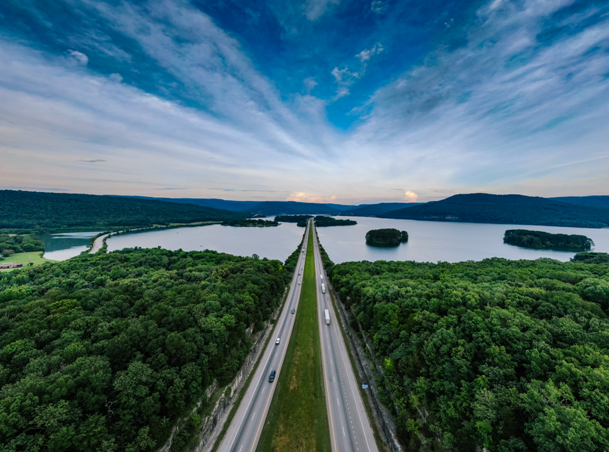 When you see a trailer being pulled by a truck along the interstate, what do you see? A load of goods being delivered from Point A to Point B? Craig Bouchard, founder and executive chairman of the revolutionary startup Ecolution kWh, sees a whole lot more. He sees each of the millions of trailers all around the world as a potential mobile power plant. Together they could make up a new kind of energy system capable of replacing today’s aging and endangered electrical grid.

For Bouchard, this is a new direction for a career that has already been distinguished and varied. He previously founded three meteorically successful metals companies. One of them, Esmark, had especially remarkable growth. It went from a few million in revenue to nearly $4 billion in just five years, starting in 2003. In 2008 it was the highest appreciating stock on Nasdaq and the NYSE. As part of its growth, Craig Bouchard pulled off the first-ever “reverse hostile tender merger.” He ousted the old board at an annual meeting.

Now he’s turned his talents to a type of energy company that’s never existed before.

Kilowatt Hours from a Truck’s Trailer

When a trailer chugs along behind its truck, there’s kinetic energy. In fact, everything that moves produces kinetic energy. What’s being done with that energy today? Nothing. It’s just going to waste. What if you could put it to use? What if you were pulling the trailer with an electric vehicle (EV) truck? You could push some of that energy back to the truck and extend the mileage between charges. As it turns out, you can generate enough power to increase the range of a single charge by as much as 30percent.

Take it a step further. Suppose the rig is powered by a conventional diesel engine. The trailer is still moving and still generating electricity. It doesn’t care what kind of truck is pulling it. If it’s a refrigerated unit, you wouldn’t need to use diesel fuel to keep it cooled. You could take advantage of the free electricity being created by the rolling trailer. If you don’t need the power while you’re driving, you might plug the trailer into a factory when you arrive. You could power any operation capable of hooking up and using the free juice.

What you’d have now isn’t just a trailer. It’s a small mobile power plant capable of delivering electricity anywhere a truck can go.

A Radical Change to the EV Truck-Trailer

Bouchard and his partners, CTO Johnny Then Gautier and CEO JohanneMedina started out with the idea of improving the efficiency of electric truck fleets. There are plenty of opportunities to make game-changing improvements right there. The growth of EV trucking is slower than expected. Reasons include high initial prices, insufficient range, high recharging station infrastructure costs, and long charging time. To attack these problems, the Ecolution kWh team came up with the Mobile Active Response System or MARS.

MARS is a collection of components, patents, and software. It’s expected to give Ecolution kWh and their transportation partners a competitive advantage for the next 20 years. It’s more than just the MARS trailer. One of its goals is to create a product that drastically reduces the cost of the battery. Not just that, but also increase the between-charges range of EV trucks and rebuild the charging infrastructure. They’ll do all this with low-emissions, environmentally friendly kinetic energy. Another important goal is to create the lowest-cost energy in the market.

More Than an EV Enhancement

Bouchard, Johanne Medina and Johnny Then-Gautier, started out by thinking of MARS as a game-changing disruption to the trucking industry. It’s a way to make the electric truck viable and profitable. Soon, however, they realized they had the potential for a whole lot more. Their revised goal is nothing less than to create the largest power company in the world. A power company consisting of the worldwide trailer fleet, pulled by both electric and diesel vehicles, and MARS powered train cars. A power company that transformspolluting industries closer to to net-zero carbon emissions.

Who says power plants need to be stationary buildings? Why does there have to be big capital expenditure for an infrastructure of power lines? There doesn’t’.The kilowatt-hours of a world powered by trailers and trains ispotentially the equal of kilowatt-hours from coal and gas fired electric power plants.

As the Ecolution team has said, “We are creating a just-in-time zero carbon emission rollingelectric grid. An electric grid which needs no massive capital expenditure, one that will replace the unstable electric grid in America and elsewhere.”

Craig Bouchard isn’t merely a man who founds companies and grows them into successful operations. He’s done plenty of that, but there’s more. He’s also a best-selling author. He wrote “The Caterpillar Way. Lessons in Leadership, Growth, and Shareholder Value,” along with Dr. James V Koch. It rose to #1 on the Barnes and Noble bestseller list. Additionally, it hit #8 on the New York Times bestseller list for business books.

He has written a book for children as well. “The Adventures of Ai”that was translated into languages as diverse as Mandarin, Arabic, Spanish and Japanese. It was a top children’s project of 2014. 200,000 users downloaded itand its accompanying video game. As a charity project, it benefited 18 worldwide organizations.

Bouchard holds a US patent for power-producing dry-type cooling systems. Ecolution kWh is on its way to holding many more patents.

Craig Bouchard has bachelor’s, master’s and honorary PhDdegrees from Illinois State University and an MBA from the University of Chicago. He has served as a director or trustee on several boards. These include New York REIT, Boston University, the University of Montana Foundation, and the athletics board of Duke University. In 2005, he was a finalist for the Illinois Ernst & Young Entrepreneur of the Year Award. He and his wife Melissa Nelson Bouchard have six children.