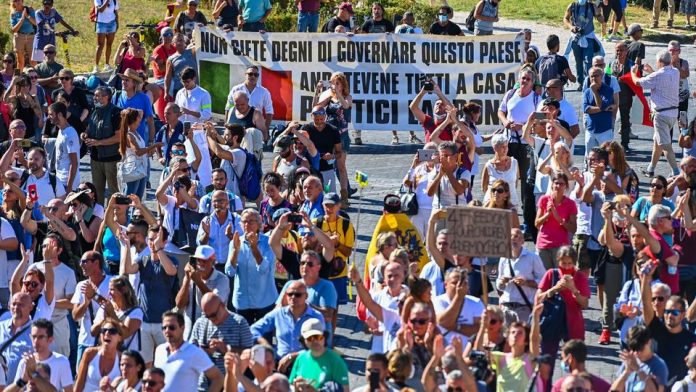 Pandemic deniers held a protest in the Italian capital, drawing a few thousand people near the Circus Maximus in the historic center.

Organisers included the far-right Forza Nuova (FN) party, the anti-vax movement, and virus-denying civic groups, which complained about all precautionary measures to fight the spread of the COVID-19 in the country, Xinhua news agency reported on Saturday.

None of the protesters at the demonstration was seen wearing a face mask.

The rally sparked condemnation by authorities. “Today we have people gathering in Rome, who think the pandemic does not exist,” Prime Minister Giuseppe Conte said during an annual event in Rome broadcast live online.

Foreign Minister Luigi Di Maio and Rome mayor Virginia Raggi were among the other political leaders condemning the protest.

The event came amid concerns for a limited but constant rise in coronavirus infections registered in the last five weeks, as official data and the latest monitoring report by Italy’s National Health Institute (ISS) showed.

In the daily statistical update late on Saturday, the Health Ministry confirmed 276,338 coronavirus cases in the country overall, with an increase of 1,695 cases over the last 24 hours, and 35,534 fatalities.

Meanwhile, doctors at the San Raffaele hospital in Milan said 83-year-old former Prime Minister Silvio Berlusconi, who was admitted to the hospital late on Thursday after being tested positive for the coronavirus, was in stable condition.

“His clinical conditions remain stable,” Alberto Zangrillo, head of the general and cardiovascular intensive care unit, said in a bulletin.