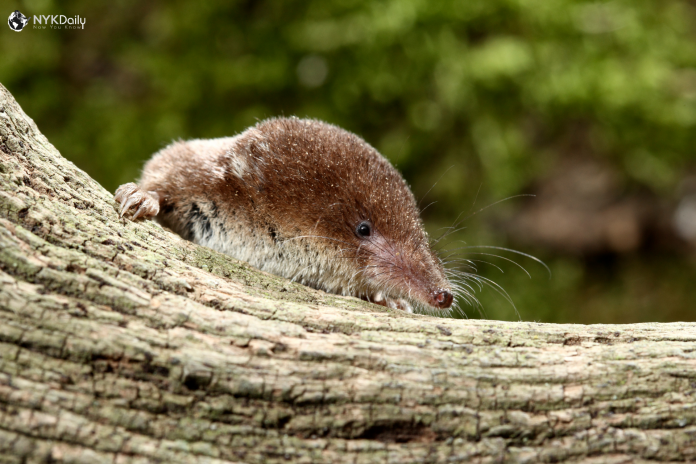 The common shrew, also known as the Eurasian shrew, is one of the most prevalent mammals throughout the Northern part of Europe, including Great Britain, but excluding Ireland. Scientifically the creature is known as Sorex Araneus.

The common shrew has small eyes, tiny ears, and a pointy face with a big nose. It is dark brown above, silver or grey below, and has chestnut-colored sides. It is slightly larger than the pygmy shrew, but its tail is only about half the body.

Common shrews are located throughout the woodlands, grasslands, and hedgelands of Scandinavia, Britain, and Eastern Europe. Each shrew builds a home range of 440 to 750 yd² (370 to 630 m²). Males often extend the lines during the breeding season to locate females. Shrews are incredibly territorial and will defend their home from other male shrews. They make their nests under dense vegetation or underground.

Common shrews are always hungry. Their insectivorous and carnivorous diet consists of slugs, amphibians, insects, worms, spiders, and small rodents. Shrews need to consume more food than their body weight each day to survive. A shrew must eat every three hours to accomplish this goal. A shrew will die of starvation if it goes without food for more than seven hours. They do not hibernate in the cold because their stomach is too small to store adequate fat stocks, and because they have a short fasting duration.

Common shrews have evolved into a fantastic adaptation to sustain through the winter. Their skulls contract by nearly 25%, and their brains get smaller by as much as 32%. Their other organs also lose weight, and their spines get smaller. Their total body weight drops by about 20%. When spring arrives, they eat until they reach approximately their original size. Researchers believe that falling temperatures trigger their bodies to breakdown tissues and bones and absorb them. As temperatures start to rise with spring onset, their bodies rebuild the lost tissues and bones. This significantly reduces their food requirements and improves their chances of survival in the winter.

Additionally, Common shrews show three distinct seasonal phenotypes. However, these phenotypes have the same relative oxygen consumption despite varying temperatures. Shrews have bad eyesight and instead use their excellent senses of hearing and smell to find food.

The common shrew breeding season lasts from April to August, but peaks during the summer months. After a gestation period of around 3-4 weeks, a female gives birth to a litter of four to eight babies. The young are weaned and independent within three weeks.

Young shrews often form a caravan behind their mother, each carrying its sibling’s tail in front with its mouth. Cute.