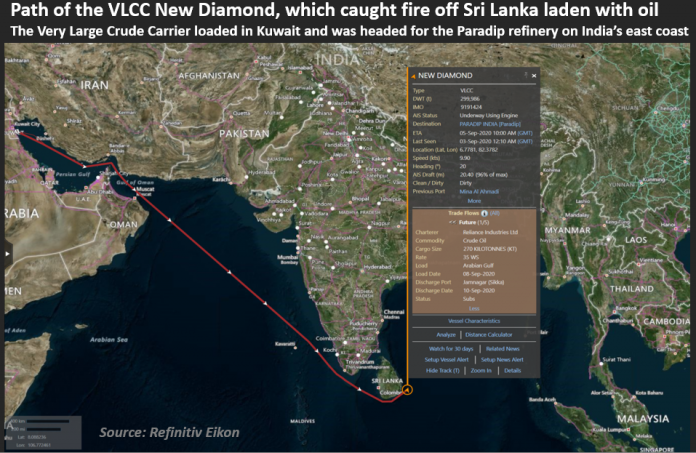 A fire that broke out on a fully loaded supertanker off the east coast of Sri Lanka has been brought under control, a spokesman for the navy of the Indian Ocean nation said on Thursday, adding that one of its 23 crew was injured.

It was headed for the Indian port of Paradip, where the state-run firm operates a 300,000 barrel-per-day refinery.

“Our personnel on the scene are reporting that the fire on board the New Diamond is under control,” the navy spokesman, Captain Indika de Silva, told NYK Daily.

“There is no damage to the cargo area, only the engine room and some areas around it. There were 23 crew on board. We are bringing one injured crew member to Sri Lanka on board one of our vessels.”

Another navy spokesman, Commander Ranjith Rajapaksa, said the VLCC was ablaze about 20 nautical miles off the east coast of Sri Lanka and its military had sent an aircraft and two ships to aid in the rescue.

“The information we have is that 22 in the ship are accounted for. One person is said to be missing,” Rajapaksa told NYK Daily.

The different figures of the two spokesmen could not immediately be reconciled.

The ship had sailed from the port of Mina Al Ahmadi in Kuwait, loaded with Kuwait Export Crude, Refinitiv Eikon tracking data showed.

Sri Lanka’s Marine Protection Authority said it would take measures to prevent any possible oil leak from the tanker.

A spill from the ship could cause an “environmental disaster”, warned Ashok Sharma, managing director of shipbroker BRS Baxi in Singapore.

“No double-hull VLCC has spilt oil to date, but (it) depends on the damage to the ship,” he added.

Thursday’s incident came a little more than a month after a state of “environmental emergency” triggered by the spill of about 1,000 tonnes of fuel oil from a Japanese bulk carrier, MV Wakashio, when it ran aground on a reef in Mauritius.

De Silva said some of the New Diamond’s crew were rescued by oil product tanker Helen M, which an industry source said was on a time charter with India’s Reliance Industries.

“The fire happened at 7.45 a.m. India time,” said the source, who spoke on condition of anonymity. “The nature is explosion and fire and serious injury to the crew.”

There was no immediate comment from IOC, Reliance Industries and Kuwait Petroleum Corp.