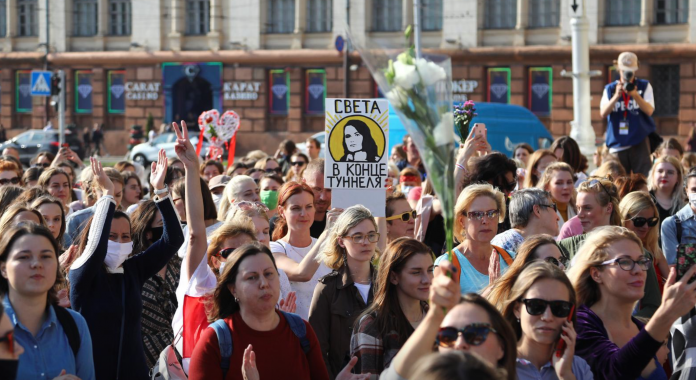 One group of women chanted “Our president is Sveta!” – referring to opposition politician Sviatlana Tsikhanouskaya who they say won the vote – before riot police dragged many of them into vans. Other protesters were arrested nearby.

Belarus, a former Soviet republic closely allied with Russia, has been rocked by mass street protests since Lukashenko’s claim of a landslide victory in an Aug. 9 vote.

He has denied rigging the election and dismissed opposition accusations of mass arrests and abuses as a Western smear campaign.

On Saturday, video on social media showed police detaining Nina Baginskaya, a 73-year-old who has become a central figure of the protest movement after scuffling with police last month.

The footage showed a masked riot police officer ripping a red and white flag out of Baginskaya’s hands before dragging her into a van.

Protesters have used the flag that Belarus adopted after the 1991 breakup of the Soviet Union, before Lukashenko restored the Soviet version four years later.

Lukashenko, a 66-year-old former collective farm manager, was sworn in for a sixth term on Wednesday in a ceremony held without warning, prompting thousands to take the streets of the capital.