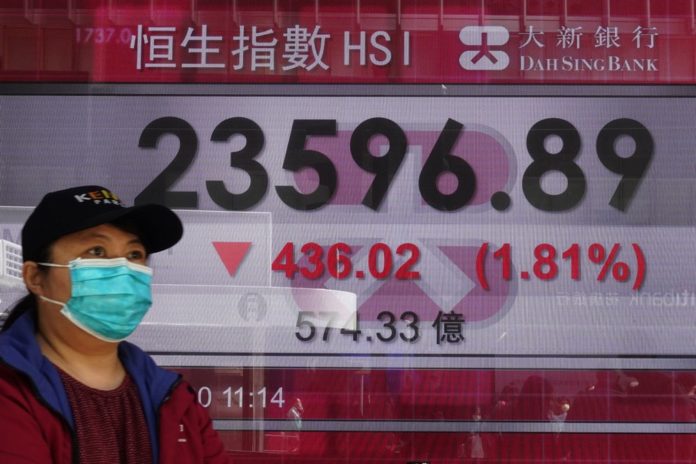 Asian shares dropped on Thursday, set for their worst day in two months, as warnings from U.S. Federal Reserve officials underscored investor worries over the resilience of an economic recovery from the coronavirus pandemic.

U.S. Federal Reserve Vice Chair Richard Clarida said on Wednesday that the U.S. economy remains in a “deep hole” of joblessness and weak demand, and called for more fiscal stimulus, noting that policymakers “are not even going to begin thinking” about raising interest rates until inflation hits 2%.

MSCI’s broadest index of Asia-Pacific shares outside Japan .MIAPJ0000PUS slumped 1.93% in the afternoon session on broad losses across the region, putting it on track for its biggest daily drop since July 16.

The MSCI index is also set for its biggest weekly drop since March, down more than 4% so far this week.

“Have we overpriced the rebound in the economy? After the stern warning from Clarida, I say we have,” said Stephen Innes, chief global markets strategist at AXI.

“I think the market was interpreting a bounce from the bottom as a cyclical recovery, but I don’t think we’re there yet. I still think there’s a lot of blood on the street, especially on Main Street.”

U.S. stocks fell on Wednesday after data showed business activity slowed in September, with gains at factories more than offset by a retreat at services industries.

While Clarida and other Fed officials have called for more fiscal assistance in boosting the economy, analysts say immediate support is unlikely with the U.S. Congress locked in a stalemate.

Additionally, a second wave of coronavirus infections in Europe threatened the economic recovery in that region pushing equities lower and propping up the safe-haven dollar.

In the currency market, the dollar touched a new two-month high. The dollar index, which measures the greenback against a basket of peers =USD hovered near those highs at 94.409 on Thursday afternoon, but edged down against the yen JPY= to 105.31.

“A stronger USD remains a significant headwind for commodity markets, with investor appetite waning,” ANZ analysts said in a note.

Oil prices fell amid uncertainty about demand because of pandemic-related travel restrictions.