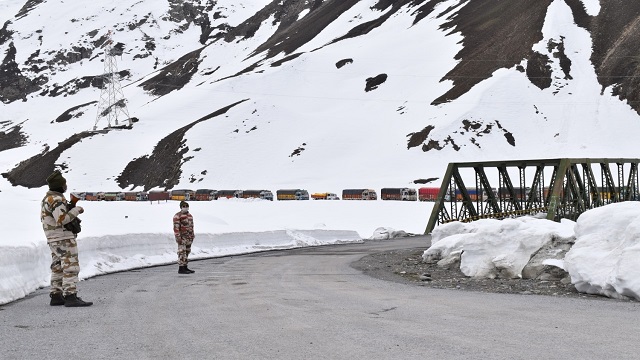 Around 40 to 50 PLA soldiers, armed with spears and other sharp-edged weapons as well as guns, have come just a few metres from the Indian Army position on the heights north of Rezang La in eastern Ladakh, and are likely to make a fresh attempt to dislodge the Indian soldiers, sources said on Tuesday.

The fresh incident comes a day after Monday’s skirmish where Chinese People’s Liberation Army troops indulged in provocative military movements and also fired shots to intimidate Indian soldiers, as per the Indian Army. China too, accused India of doing the same.

The Indian Army, in a statement, said that China continues to “undertake provocative activities to escalate” the situation at the border and it was the PLA troops who “fired a few rounds in the air” in an attempt to intimidate Indian troops.

“At no stage has the Indian Army transgressed across the LAC or resorted to use of any aggressive means, including firing,” Indian Army spokesperson, Col Aman Anand said.

The army stated that it is the Chinese side that has been “blatantly violating agreements and carrying out aggressive manoeuvres, while engagement at the military, diplomatic and political level is in progress”.

“In the instant case on September 7, 2020, it was the PLA troops who were attempting to close-in with one of our forward positions along the LAC and when dissuaded by own troops, the PLA troops fired a few rounds in the air in an attempt to intimidate own troops,” Col Anand said.

However, despite the grave provocation, Indian troops “exercised great restraint and behaved in a mature and responsible manner”, he added.

“The Indian Army is committed to maintaining peace and tranquility, however, it is also determined to protect national integrity and sovereignty at all costs. The statement from the (PLA’s) Western Theatre Command is an attempt to mislead their domestic and international audience.”

The Indian Army has occupied crucial heights in areas around the south bank of Pangong lake and the Chinese have made several attempts to dislodge the Indian troops from these positions.

The area has become the new friction point but the Indian Army seems be in an advantageous position, as its possession of these heights allows it to dominate the Chinese Moldo garrison and the Spangur Gap under Chinese control.

Both Indian and China lay claim to some of these heights.

One of the most critical heights the Indian Army is manning is the Rechin La, which the Chinese are protesting against.

From here, the Indian Army enjoys a vantage point not just for Chinese army military bases on the south bank of the Pangong lake but can also be in range of the Finger 4 area north of the lake.

India and China are engaged in a four-month-long standoff at the LAC in eastern Ladakh. Despite several levels of dialogue, there has not been any breakthrough and the deadlock continues.