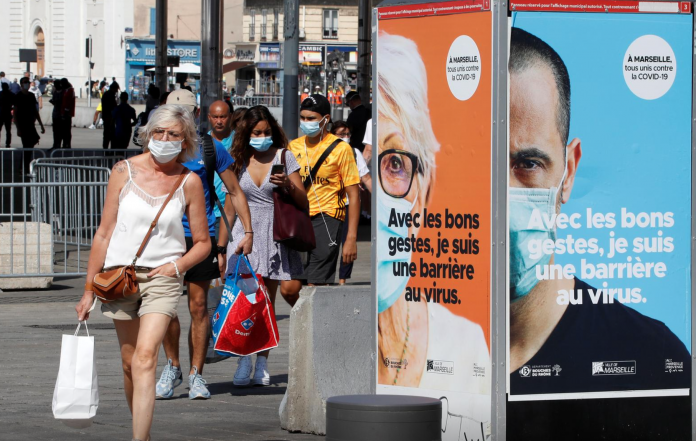 Civic leaders in Marseille reacted with anger on Thursday to the closure of the city’s bars and restaurants, saying they had not been consulted by the French government which ordered the measures to contain an upsurge in COVID-19 cases.

Health Minister Olivier Veran ordered bars and restaurants in Marseille to shut for two weeks from next Monday, after placing the city and surrounding region on the Mediterranean coast on the maximum alert level for the spread of the virus.

Local politicians said the step was out of proportion to the risks and would devastate their economy.

“It was with surprise and anger that I learned of a decision on which Marseille city hall was not consulted,” Marseille mayor Michele Rubirola wrote on Twitter.

“There is nothing in the public health situation that justifies this move. I won’t allow the people of Marseille to become the victims of political decisions that no one understands.”

Marseille city hall sought a 10-day reprieve before it imposes the new measures.

“I’m asking the government for 10 days before the new measures come into effect”, Payan also said.

Renaud Muselier, president of the regional council of Provence-Alpes-Cote d’Azur, which includes Marseille, said the closures amounted to a collective punishment for people in his region.

“This decision is unilateral, ill-conceived and unfair,” Muselier wrote on Twitter.

Responding to the criticism, Veran tweeted that the bar and restaurant closures were designed to protect people in Marseille because the epidemic was worsening, and that he had given advance notice to local officials.

Paris mayor Anne Hidalgo also expressed her disagreement after the French capital and its suburbs were declared on Wednesday “reinforced danger zones” meaning bars and restaurants will have to close at 10 pm at the latest.

Hidalgo said in a video broadcast on BFM TV that the new measures were ordered without consultation.