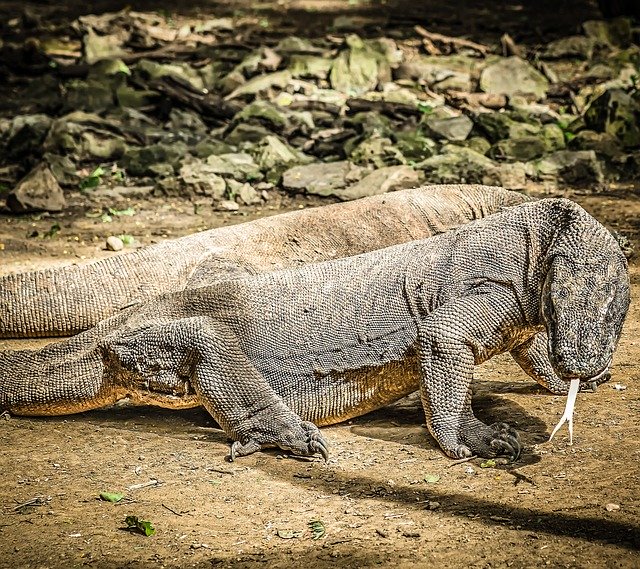 The Komodo dragon, also known as the Komodo monitor, is a lizard species found in the Indonesian islands of Flores, Rinca, Komodo, and Gili Motang. A member of the monitor lizard family, Varanidae, is the largest extant lizard species, growing to a maximum length of 10ft (3 meters) and weighing up to roughly 300 pounds (135 kilograms.)

Here are six Facts about the Indonesian Komodo Dragons

Komodo dragons have flourished for millions of years in the harsh climate of Indonesia’s Lesser Sunda Islands. Though these athletic reptiles can walk up to seven miles per day, they prefer to stay close to home—seldom venturing far from their homes.

Although most baby Komodo dragons are produced through sexual reproduction, females separated from males sometimes create offspring through parthenogenesis. Damn! Every year, when they’re ready to mate, female Komodo dragons give off a smell in their excretions for males to follow. When a male dragon discovers a female, he pricks her back and licks her body. If she starts licking him back, they mate. Males also sometimes wrestle with one another to merit mating rights. Pregnant females then lay around 30 eggs, which they bury in the earth until they hatch nearly eight months later. About 18 inches (45 cm) long, the newly hatched young live in trees for many months. As females have both male and female sex chromosomes, female dragons can reproduce asexually, as mentioned above, in parthenogenesis.

Komodo dragons have bony coats in their skins, known as osteoderms, of many varying shapes, which is unusual, but also that a Komodo dragon isn’t born with them. Just as tree rings reveal the estimated age of a tree, osteoderms disclose the Komodo dragon’s growth.

As the powerful predators, Komodo dragons will eat almost anything that moves, including deer, carrion, smaller dragons, pigs, and even adult water buffalo. Komodo dragons rely on camouflage and patience when hunting, lying in wait for prey. When a victim strolls by, the dragon springs, using its sharp claws and serrated, shark-like teeth to kill its target.

The Komodo dragon has poison glands filled with toxins that lower blood pressure, cause extensive bleeding, stop clotting, and cause shock. Dragons bite down with hard teeth and pull back with mighty neck muscles, resulting in substantial gaping wounds. The venom then accelerates the loss of blood and sends the prey into confusion.

Animals that avoid the jaws of a Komodo will only feel successful briefly. Dragons can easily follow a survivor for miles as the poison takes effect, using their strong sense of smell to home in on the body. A dragon can eat a mountainous 80 percent of its body weight at any point.

There’s a softer side to Komodo dragons. It turns out Komodo dragons also love playing. Captive individuals have been seen playing with shoes, shovels, and even Frisbees. The dragons interacted with the objects were determined to be without food motivation and aggression and can be considered play.